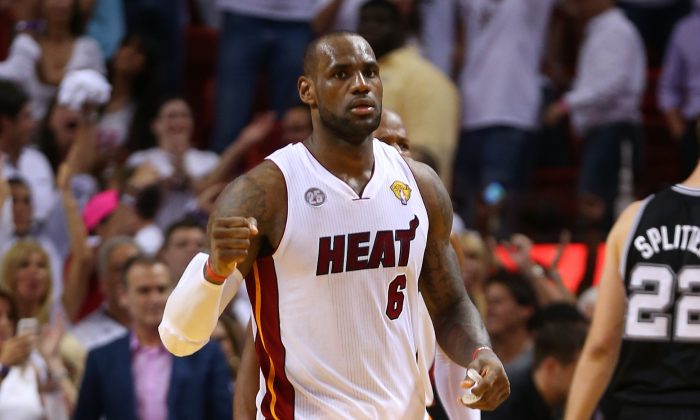 LeBron James #6 of the Miami Heat reacts after defeating the San Antonio Spurs 103-100 in overtime in Game Six of the 2013 NBA Finals at AmericanAirlines Arena on June 18, 2013 in Miami, Florida. (Mike Ehrmann/Getty Images)
NBA Finals

Chris Bosh, true to his pre-game word, blocked Danny Green’s final desperation three-pointer in overtime, sealing the Heat’s 103 – 100 comeback win to force a Game 7 and conclude one of the more thrilling finals’ games in NBA history.

Bosh said before the game that Green–who set a new NBA Finals record last game with most 3-pointers made in a series–“won’t be open tonight.” While Green was held to 3 points, Bosh was instead burned by a turn-back-the-clock performance from Spurs big man Tim Duncan early on. Duncan scored 25 in the first half, including 13 straight in a 17-4 run to end the first half with the Spurs up 50 – 44.

Duncan–37 years old and possibly playing his second-to-last game ever–finished with 30 points, though none came after the third quarter. He also had 17 rebounds.

San Antonio maintained the lead throughout the third quarter and were up 10 heading into the fourth before the Heat suddenly woke up. Miami went on a 19-7 run to start the final quarter as Ray Allen’s layup at the 6:03 mark gave them their first second half lead at 84 – 82. It would be one of several big shots by Allen.

San Antonio temporarily weathered the five-minute storm though as Tony Parker scored back-to-back buckets to put the Spurs back on top at 91 – 89 with 58 seconds left.

Despite the the two clutch baskets, Parker finished just 6-for-23 from the field, for 19 points. He was guarded by LeBron James for a majority of the second half.

LeBron James, who was held to just 3-for-12 shooting in the first three quarters, was especially dominant in the fourth, scoring 16 points in the final period—including a three-pointer with 20 seconds left to cut the Spurs’ lead to 94 – 92.

Then, after Kawhi Leonard hit one of two free throws to give the Spurs a three-point lead with 19 seconds left, Ray Allen hit a game-tying three-pointer with 5.2 seconds, after backpedaling behind the three-point line, to send the game into overtime.

Tony Parker missed a heavily-guarded desperation jumper at the buzzer in regulation.

After James put the Heat up 101 – 100 with a short jumper at the 1:43 mark of overtime, the teams traded defensive stops. Manu Ginobili’s final drive through the lane (with two seconds left) was stripped by Allen, and Allen was immediately fouled.

Allen finished with nine big points, while James had a triple-double–32 points, 11 assists, and 10 rebounds. Mario Chalmers put up 20 points on 4-for-5 shooting from beyond the arc.

Game 7 is Thursday night. Since the advent  in 1985 of the 2-3-2 home-away-home format, four series have gone to seven games. No team in those series has won a Game 7 on the road.