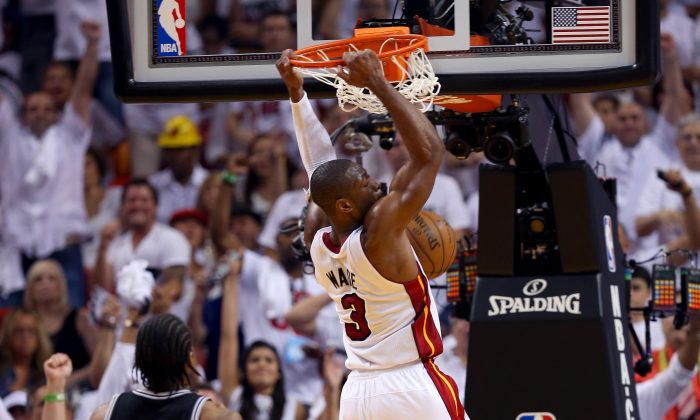 Dwyane Wade #3 of the Miami Heat dunks the ball in front of Kawhi Leonard #2 of the San Antonio Spurs in the third quarter during Game Seven of the 2013 NBA Finals at AmericanAirlines Arena on June 20, 2013 in Miami, Florida. (Mike Ehrmann/Getty Images)
NBA

A thrilling back-and-forth contest is ended with a banked in buzzer-beating three-pointer from Mario Chalmers—his first three in six attempts. His three was preceded by a three from Battier—his fourth in four tries.

LeBron James had a big quarter with 13 points—including a trio of threes as the Heat have now launched 24 long balls, connecting on 10 of them.

San Antonio has hung tough in the hostile environment though. Tim Duncan has 17 points to lead the Spurs. Manu Ginoblili has 13 points and has stayed aggressive in driving to the basket.