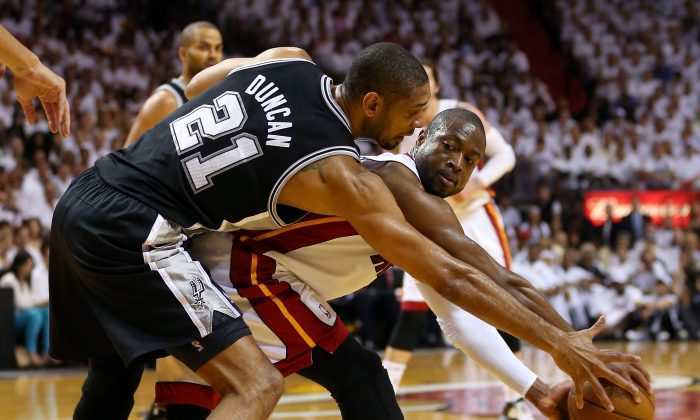 Dwyane Wade #3 of the Miami Heat looks to pass the ball against Tim Duncan #21 of the San Antonio Spurs in the first quarter during Game Seven of the 2013 NBA Finals at AmericanAirlines Arena on June 20, 2013 in Miami, Florida. (Mike Ehrmann/Getty Images)
NBA

The opening 12 minutes was marked by plenty of sloppy play—as well as rugged defense. Miami hit just 36.9 percent of it’s shots while San Antonio was at just 31.8.

The Spurs actually showed no ill effects of their crushing Game 6 loss in the early going, jumping out to an early 11-4 lead as the Heat hit just 4 of it’s first 16 shots. A pair of late threes by Shane Battier put the Heat on top to end the quarter.

Battier hit just one three through the first four games, but now has seven in his last three.

Kawhi Leonard led the Spurs with five points and six rebounds in the opening quarter.