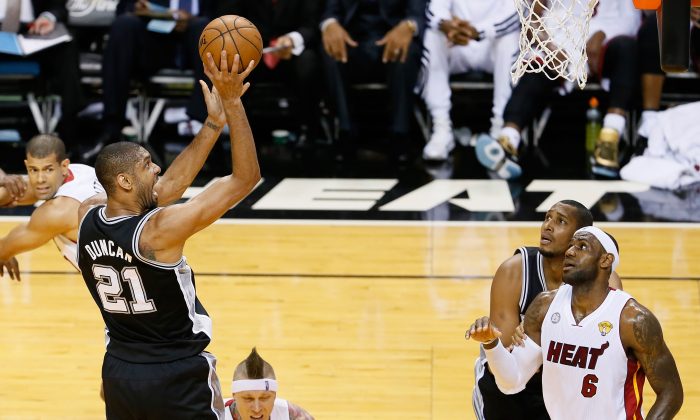 Tim Duncan #21 of the San Antonio Spurs shoots over LeBron James #6 of the Miami Heat in the first half during Game Seven of the 2013 NBA Finals at AmericanAirlines Arena on June 20, 2013 in Miami, Florida. (Kevin C. Cox/Getty Images)
News

A game that the Heat have controlled as the aggressors has stayed close as San Antonio has valiantly kept pace. The Spurs have no threes from Danny Green (who has missed all six of his shots) but Tim Duncan has been right there with a team-high 13 points, including 5-for-5 from the free throw line.

Tony Parker was the only other Spurs in double-figures with 10 points. As a team the Spurs are shooting just 35 percent, while Miami, after a slow start, is up to 43.2 percent.

Dwyane Wade, despite calls for Miami to move him to the bench, lhas 14 points off of 7-for-12 shooting, while LeBron James has a team-high 15 points.

On the perimeter, Shane Battier has had the hot hand hitting all three of his three-pointers, while Mario Chalmers and Mike Miller have struck out on each of their three long-range attempts. Meanwhile Chris Bosh played just 10 minutes, picking up three fouls.