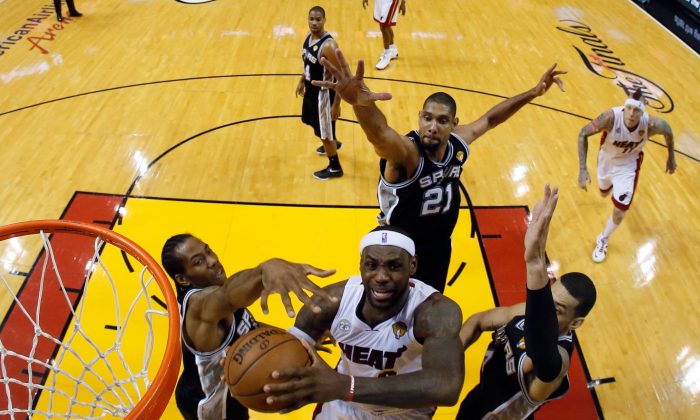 LeBron James #6 of the Miami Heat looks to go up for a shot against Kawhi Leonard #2, Tim Duncan #21 and Danny Green #4 of the San Antonio Spurs in the first half during Game Six of the 2013 NBA Finals at AmericanAirlines Arena on June 18, 2013 in Miami, Florida. (Kevin C. Cox/Getty Images)
NBA

Tim Duncan, perhaps sensing the opportunity tonight, continued his torrid start, hitting 5 of 7 shots in the second quarter, after hitting all six shots in the first, and now has 25 points for the game—easily the team leader—while adding 8 rebounds.

Meanwhile, the Spurs as team ended the half on a 17-4 run to take the lead back. Duncan scored the first 13 of those points as the Spurs are shooting 58 percent from the floor.

Mario Chalmers has hit 5 of 7 shots in the half and has 14 points at the break to lead the Heat. LeBron James has 9 points off of 3-for-9 shooting, while Dwyane Wade had 7 points off of 3-for-7 shooting. The Heat are shooting just 41 percent from the floor and have yet to turn on their trademark defense.

Danny Green hit just one of two threes, in a relatively quiet first half, for the Spurs’ sudden sharpshooter. Manu Ginobili, meanwhile has been held scoreless after starting for the second straight game.