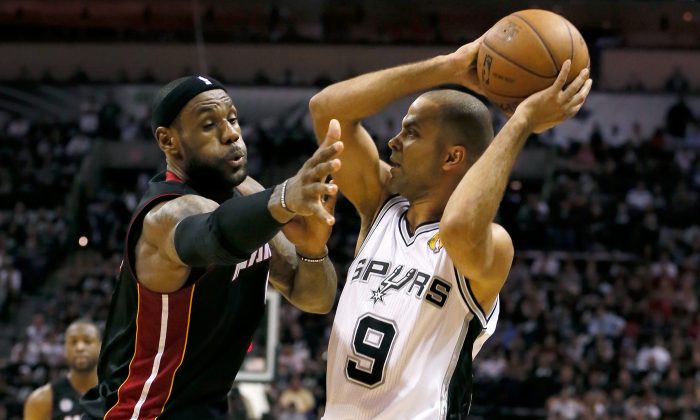 Tony Parker #9 of the San Antonio Spurs with the ball against LeBron James #6 of the Miami Heat during Game Five of the 2013 NBA Finals at the AT&T Center on June 16, 2013 in San Antonio, Texas. (Kevin C. Cox/Getty Images)
NBA

Danny Green’s three-pointer though, with 9:40 left re-established a seven-point Spurs’ lead and gave him a Finals’ record of 23 threes, in just 33 attempts. Green hit another three and finished the quarter with 19 points.

San Antonio was able to keep Miami at arm’s length throughout the quarter. Miami got to with one at 75-74 with 3:04 left, before the Spurs went on a 12-1 run to break the game open again. Manu Ginobli had seven points in the run and now has a team-high 20 for the game.

LeBron James, who had the Heat’s only points during the run, has 22 points thus far, as does Wade to lead Miami. The duo, however were unable to convert on fast break opportunities mid-way through the quarter.

Miami’s team’s defense hasn’t been there as the Spurs have shot 60.4 percent from the floor for the game.

Tony Parker, who had zero points in the second half in Game 4, put up six in the quarter and now has 17 for the game. Tim Duncan has 13 points and a team-high 11 rebounds.