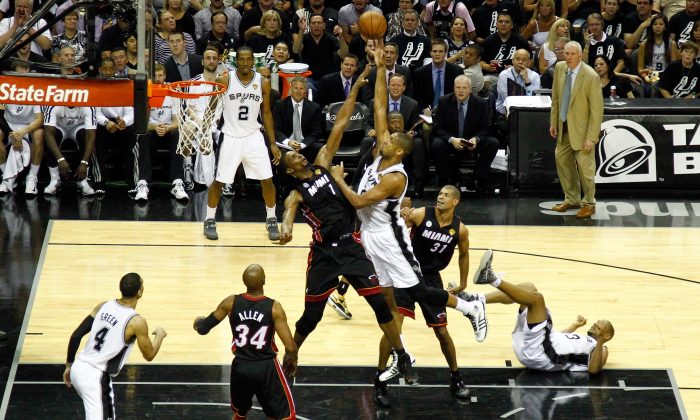 Manu Ginobili scored a season-high 24 points and dished out 10 assists, while in a starting role for the first time this season, as the San Antonion Spurs took Game 5 with a 114-101 win.

Danny Green continued his hot-shooting for San Antonio, drilling six three-pointers in 10 attempts to set a new NBA Finals record with 25 threes—in just 38 attempts. Green had 24 points for the game.

Attempting to match the Miami Heat’s smaller lineup with Mike Miller in for Udonis Haslem the past two games, Ginobili hit a long two-pointer right off the bat for San Antonio as the Spurs were a hot-shooting bunch from the start. San Antonio hit 60 percent from the floor for the game, while Miami lagged behind at 43 percent.

The Spurs’ hot-shooting helped them overcome 18 turnovers as compared to 13 by Miami.

Miller, who didn’t score in Game 4 despite starting, was equally ineffective from the floor in Game 5 with zero points in 25 minutes. Teammate Ray Allen converted a pair of four-point plays in the game finished with 21 points—including 15 in the final quarter, keeping the game from being a total laugher.

San Antonio, which never trailed in the game, first broke the game open with a 15-2 first quarter run to take a 13-point lead after one. Miami cut the lead to single-digits before trailing at halftime (61-52) and were within one at 75-74, with 3:04 left in the third, before the Spurs ripped off a 21-2 run that put the game out of reach.