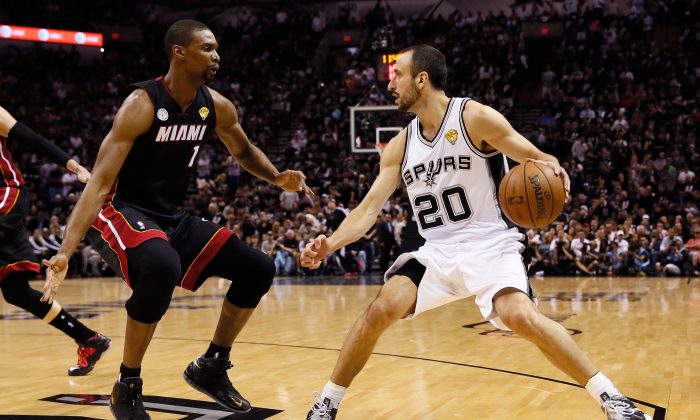 Manu Ginobili #20 of the San Antonio Spurs with the ball against Chris Bosh #1 of the Miami Heat in the first quarter during Game Five of the 2013 NBA Finals at the AT&T Center on June 16, 2013 in San Antonio, Texas. (Kevin C. Cox/Getty Images)
NBA

The Spurs went small to start the game to match up better with the Heat, which have had Mike Miller start in place of Udonis Haslem the past two games. Ginobli, who has averaged just 7.5 points per game this series, hit a long two-pointer on the opening possession as the Spurs were the aggressors from the opening tip. The former sixth-man of the year had seven points by the end of the quarter.

San Antonio, as a team, hit each of it’s first four shots from the field in a frenetic-paced first several minutes of the period. An aggressive Tim Duncan scored seven points, while Tony Parker looked nothing like a player with a strained hamstring in putting up seven points of his own.

Meanwhile, Dwyane Wade has continued his aggressive play from Game 4 with eight points, four of off free throws, as well as three assists. LeBron James put up seven points as Miami’s ‘Big Three’ scored 17 of the team’s 19 points.

San Antonio ended the quarter on a 15-2 run to turn a 17-all tie into a 13-point lead at the end of the opening quarter.