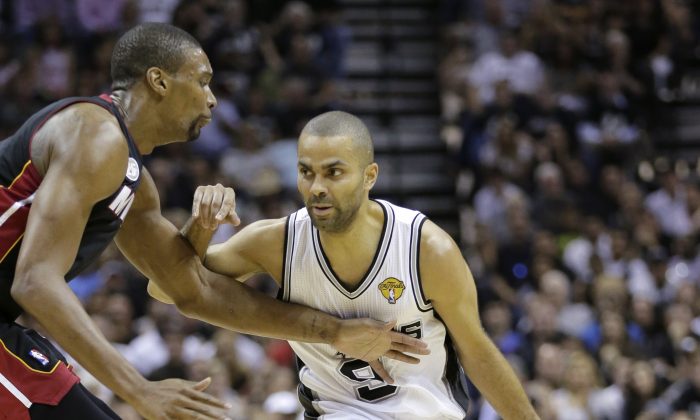 Danny Green picks up right where he left off Tuesday with an early three-pointer—his only score of the quarter. Meanwhile Gary Neal was right with Green hitting his first three to put the Spurs up 10-3 early on. Neal had seven points in the quarer.

As a team the Spurs, which set an NBA-record with 16 threes in Game 3, picked up right where they left off by drilling their first three treys.

Tony Parker, who was questionable to play, erased any doubts with a pair of field goals in the first two minutes. Parker finished the quarter with 11 points off of 5 for 8 shooting.

Until Ray Allen’s floater with 2:43 left, no one besides the ‘Big Three’ of James, Wade, and Bosh had scored. LeBron James, after struggling mightily in Game 3 was back to his old self with 11 points off of 5 for 6 shooting and was aggressive in getting to the hoop on several fast breaks.