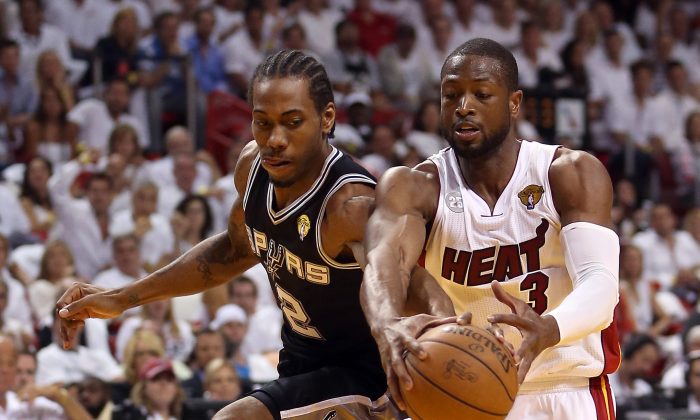 LeBron James #6 of the Miami Heat with the ball against Kawhi Leonard #2 of the San Antonio Spurs in the third quarter during Game Two of the 2013 NBA Finals at AmericanAirlines Arena on June 9, 2013 in Miami, Florida. (Christian Petersen/Getty Images)
NBA

The Heat end the quarter on a 14-3 run, highlighted a pair of threes from Ray Allen and Mike Miller.

LeBron James continues his slow-shooting start, missing his first four shots of the half, but stays aggressive in driving to the basket. James is now 3 of 13 shooting for the game, but the Heat as a team have hit 48.4 percent from the field, while San Antonio is at 41.4 percent.

The alarm has certainly gone off in the Spurs locker-room with San Antonio coming out alert and aggressive early in the third quarter. Kawhi Leonard has been a big reason for the Spurs 33-26 advantage on the boards. Leonard has 14 rebounds to go along with 9 points. Duncan right behind him with 11 rebounds.

Danny Green with his fifth three of the game and is now 6-6 overall shooting with 17 points overall. The Spurs are now 9 for 14 from three-point land.

Chris Bosh has been aggressive putting up 12 points (most of them long-range jumpers) while pulling down 9 rebounds.