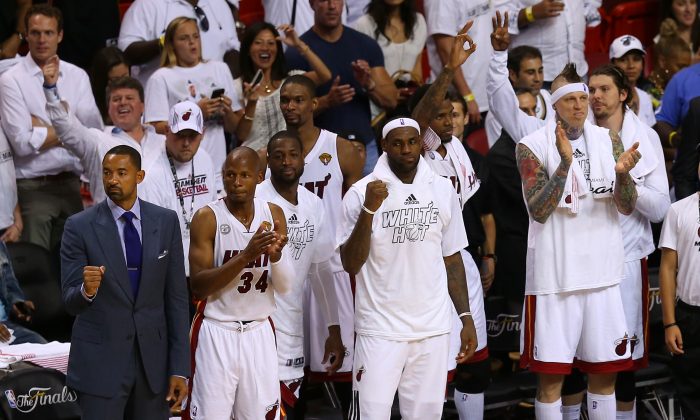 Juwan Howard, Ray Allen #34, Dwyane Wade #3, LeBron James #6 and Chris Andersen #11 of the Miami Heat celebrate from the bench in the fourth quarter while taking on the San Antonio Spurs during Game Two of the 2013 NBA Finals at AmericanAirlines Arena on June 9, 2013 in Miami, Florida. (Mike Ehrmann/Getty Images)
NBA

Heat Blow Out Spurs to Even NBA Finals

Mario Chalmers scored a team-high 19 points as the Heat pulled away in the second half to blow out San Antonio 103-84 in Game 2 of the NBA Finals to even up the series.

The Heat blew the game open with a 33-5 run that turned a 62-61 third quarter deficit into a 94-67 laugher with 7:13 left in the game. By that time Gregg Popovich, who famously rested his top players in a regular season matchup against the Heat that drew the ire of NBA commissioner David Stern, had already emptied his bench.

LeBron James hit 7 of 17 shots (including all four of his fourth-quarter attempts) for 17 points, while dishing 7 assists and pulling down 8 rebounds. In addition he had a highlight block of Spurs’ center Tiago Splitter who went for a dunk and met James mid-air.

The Heat were also buoyed by bench play as both Ray Allen (3-5 on three-pointers) and Mike Miller (3-3 three-pointers) were deadly from the outside. As a team Miami hit 10 of 19 from beyond the arc.

San Antonio guard Danny Green hit a trio of threes to start the scoring for the Spurs, keeping the team in the game in the first half. Green ended up hitting all six shots attempted for team-best 17 points.

He was the lone highlight though for San Antonio.

The Spurs seemed off from the get-go, committing as many turnovers in the first quarter (four) as they had in the entire Game 1. They finished with 16 for the game, while Miami committed just six.

Tim Duncan had a game to forget for the Spurs hitting just 3 of 13 shots for 9 points. Tony Parker wasn’t much better hitting 5 of 14 shots for 13 points.