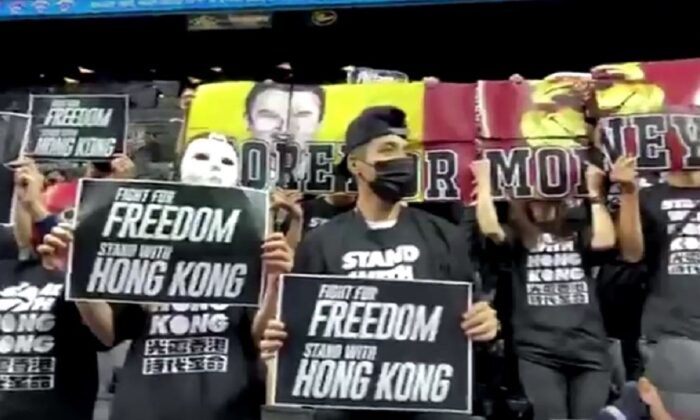 Houston Rockets General Manager Daryl Morey, the executive, later faced backlash within the league and from the Chinese regime and Chinese businesses. Rockets owner Tilman Fertitta distanced himself from Morey’s view and Rockets star James Harden, while in China for a game, apologized for what Morey did. Los Angeles Lakers star LeBron James called Morey “misinformed.”

The NBA apologized to the Chinese regime but didn’t bow to pressure to fire or discipline Morey.

The reaction prompted criticism from fans and others, who accused NBA executives and players of kowtowing to China. NBA security has also been accosting fans who show support for Hong Kong and other issues sensitive in China, at one point seizing a fan’s “Google Uyghur” sign.

With that backdrop, hundreds of fans at the game in New York on Friday showed up at Barclays Center with “Stand With Hong Kong” and “Free Tibet” shirts. The larger group, wearing the Hong Kong shirts, were seated near the court in eight rows.

“We want to use our performance art to show our support for Hong Kong and the NBA,” one of the organizers of the group, author Chen Pokong, 55, told the New York Post. “They want to take away freedom of speech and now spread dictatorship to America.”

“Lebron needs to take time on this issue,” Duncan said. “Why is he not supporting Democracy? I think the King has made a royal mistake.”

The group also held other signs, including some mentioning James by name.

As the situation unfolded with Morey, China, and the NBA, Nets owner Joe Tsai wrote an open letter to fans on Oct. 6, saying he was in favor of “people freely expressing their opinion.”

“This freedom is an inherent American value and the NBA has been very progressive in allowing players and other constituents a platform to speak out on issues. The problem is, there are certain topics that are third-rail issues in certain countries, societies and communities,” he said.

One of them, he claimed, is Hong Kong being a Chinese territory. “This issue is non-negotiable,” he said.

According to journalist Yashar Ali, Duncan, a producer and activist, bought some 300 tickets for fans to attend the game wearing the “Stand With Hong Kong” shirts. Many, if not all, appeared to be Asian; some wore black breathing masks that have become popular for protesters to wear in Hong Kong.

Among those in attendance was Nathan Law, a Hong Kong lawmaker and activist.

“I was reminding NBA and the world that we are fighting for same cause and protecting freedom of speech,” Law wrote on Twitter. “I hope no one would be punished because of exercising their rights.”

Nets star Kyrie Irving was the latest player on Friday to discuss the issue.

“When you think about communities across the world, I think that a lot of people would stand for world peace. Government gets involved, impacts different communities in different ways. The reality is that as individuals, it’s our job to stand up for what we believe in,” Irving told reporters.

“Now I understand that Hong Kong and China is dealing with their issues, respectively, but there’s enough oppression and stuff going on in America for me not to be involved in the community issues here as well. That’s one of those four pillars that goes in the black community, colored people here still in America. Like we’re still fighting for everyday freedom.

“When I think about Hong Kong and China, the people are in an uproar. For us as Americans to comment on it, us as African Americans or American Indians to comment on that, you’re connected nonetheless—especially when it impacts freedoms or world peace. For me, as an individual, I stand up for those four pillars. When they’re being conflicted, I can understand why protesters come to the game.”

“America was built on protesting, built on slavery,” he added. “But things happen all across the world and we’re just taking notice and social media puts it right in front of everyone’s faces. If you’re not thinking with a selfless attitude, then you can come out and kind of get yourself caught up in a few things politically that really impacts a certain group of people in an area of the world.”