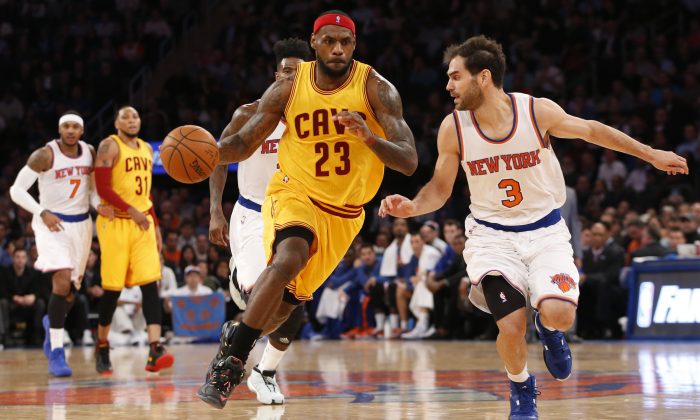 The NBA season is about a quarter of the way through and the playoff outlook is starting to shape up, especially in the Eastern Conference.

Barring a huge turnaround, the Philadelphia 76ers, Detroit Pistons, New York Knicks, and Charlotte Hornets won’t make the playoffs. Of these teams, the Hornets appear to have the best shot, and could make up the ground. But for now they’re out.

That leaves 11 teams vying for eight seeds, including the injury-depleted Indiana Pacers and the surprising Milwaukee Bucks.

Check out the latest playoff predictions below.

The Cavs have stringed together an eight game winning streak after a three game losing streak, and are looking stronger and stronger. Two of the wins came over conference rivals Washington and Toronto. The team will most likely finish in the top four, and has a good shot at finishing number 1 in the division.

The Cavs have been subject of much of the trade rumors and speculation so far, and will likely make at least one deal for a swingman or rim protector before the deadline.

The Wizards have broken into the top tier of the conference, and are up here because they’ve weathered injuries a little better than the Raptors, and aren’t as injury prone as the now infamous Bulls. The Wizards also appear to be a lock for the top four after finishing fifth last season.

The Wizards are getting a great year so far from John Wall, who is in the top 5 in the league in both assists and steals, but more interesting is the 3-point shooting of Rasual Butler, who is shooting 53 percent from behind the arc while averaging 10.9 points per game.

The Raptors are off to a strong start, and have been winning some tough games even after losing DeMar DeRozan, who is expected to return soon. But the losses are starting to pile up, as the team has gone 2-3 without him, including the game he left on November 28.

Kyle Lowry has made his mark so far, averaging 20.3 points on 44 percent shooting, along with 7.2 rebounds and 4.8 assists, but it’s clear this isn’t the same team without DeRozan.

Chicago has had a lot of injuries so far, which could mean that they’ll be much healthier for much of the rest of the season or could signal a season-long issue. Either way, it’s shown with losses to some lesser teams. One constant has been Jimmy Butler, outstanding with 21.7 points on 48 percent shooting in 39.9 minutes per game.

The Bulls bench is also coming through as well, with some players stepping into the starting lineup and others still doing well off the bench. Nikola Mirotic is perhaps the best addition besides Pau Gasol, averaging 6.9 points and 5.1 rebounds off the bench in 17.6 minutes per game.