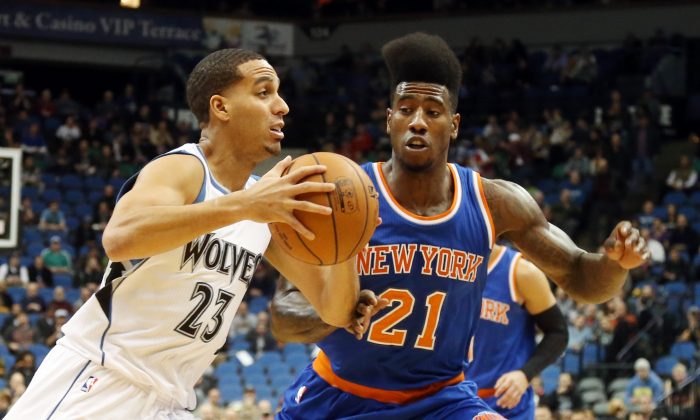 NBA Buyout Candidates 2015: 10 Players Who Could End Up on Post-Deadline Market

Now that the trade deadline has passed, fans are wondering about potential buyout candidates that could end up on their teams.

Three major candidates were involved in a trade on deadline day–one being Kendrick Perkins. The backup center has been linked to the Cavaliers, Clippers, and Bulls so far.

A host of other players could easily end up on the market very soon with buyout negotiations already starting for some.

Check out other candidates below.

The Minnesota Timberwolves shooting guard is a proven scorer, and has bounced back since returning to injury on January 28.

Martin is a career 18 point-a-game scorer, and is averaging 20.2 this season on 15 shots a game (44 percent shooting). He’s also lethal from long range, shooting 41 percent this season.

Sources told USA Today that there is “no way” that Flip Saunders will approve of a buyout, but that was before the deadline passed and the Wolves were likely trying to get something back for the 32-year-old.

If Martin does hit the open market, look for a number of teams to jump at the opportunity to land him–including the Wizards, Heat, and Pelicans.

Prince is another veteran who could hit the market soon despite being involved in a trade on deadline day. The Pistons acquired Prince, who was part of Detroit’s 2004 title team.

But a league source told CSN that Prince might discuss a buyout with the Pistons because he would prefer to be part of a more established team.

The Pistons have a shot at making the playoffs in the Eastern Conference but few predict them to make it far even if they do make it.

Prince may not be a starter anymore but can still provide quality minutes and leadership. The Clippers are expected to go after Prince hard if he gets bought out.

As with the rest of this list, Neal is a bench player who would likely play no more than 15 or 20 minutes a game.

Neal landed with the Timberwolves in the Mo Williams deal–which happened prior to deadline day–and would like to get back with a team competing for the playoffs.

Neal is known for his outside shooting, although he’s struggling this season–hitting just 29 percent from 3-point range.

But a change of scenery could provide a boost to Neal, who has a career 38 percent outside stroke. The Hawks are among the teams that have Neal on their radar, reported Ken Berger of CBS. The Wizards could also make a play, and several other playoff teams are interested.

The Nuggets shooting guard is another possible sparkplug off the bench if he gets bought out.

Denver has already traded away two major pieces and is expected to buy out at least one player, with Foye a leading candidate according to Howard Beck of Bleacher Report.

The 31-year-old is having a bad year–shooting just 31 percent from the field–but teams could bank on him rounding back into form in a new uniform.

Teams interested in Neal could turn to Foye if they fail to land the former, as Foye has a career 37 percent stroke from outside.

Allen, the legendary shooter, is the only player on this list who has not played a game this season. He’s already “bought out,” but still hasn’t made it clear if he’ll sign with a contender or opt to retire.

If he does make himself available, he’s one of the hottest potential additions on the market.

The Wizards, Warriors, Heat, and Cavaliers are among the teams vying for his services. Washington has been calling Allen or his representative every week or two to get the latest, in an indication of how much teams want the veteran to join their squads.

The 39-year-old, who would become one of the oldest players in the league, shot 37 percent from long range last season, and is a career 40 percent shooter from there.