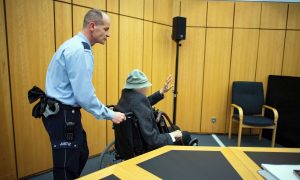 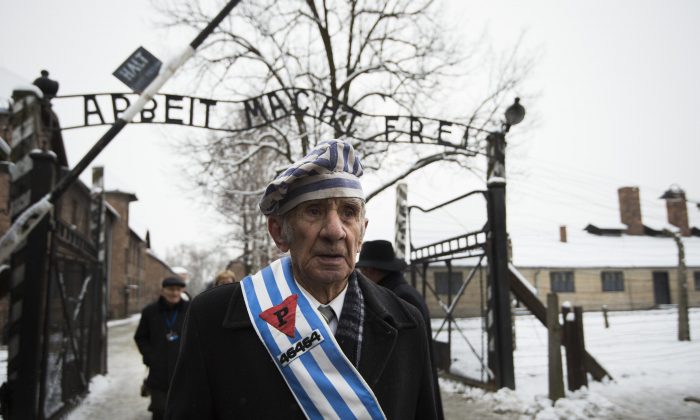 Auschwitz survivor Miroslaw Celka walks out of the death camp gate with the sign above it saying "Work makes you free,” on the 70th anniversary of the liberation of the Nazi extermination facility in southern Poland, on Jan. 27, 2015. (Odd Andersen/AFP/Getty Images)
Europe

WARSAW—The number of Jews murdered by Nazis at the peak of the Holocaust was far higher than previously thought, a new study has revealed, and the only reason it tapered off was because there was “no one left to kill.”

Professor Lewi Stone, a mathematical biologist at Israel’s University of Tel Aviv and Royal Melbourne Institute of Technology University in Australia, found that in the Nazi death camps of German-occupied Poland, about 15,000 Jews were killed each day at the height of the slaughter. The maximum Holocaust death rate was previously believed to be 6,000 killings daily at the Auschwitz death camp.

Known in German as Aktion Reinhard, this was the secretive Nazi plan to exterminate Jews in occupied Poland during World War II on a genocidal scale.

Stone used data from Holocaust historian Yitzhak Arad of dedicated trains running from towns and ghettos in Nazi-controlled Poland to three notorious death camps—Belzec, Sobibor, and Treblinka. The trains were part of a deadly transport network designed to kill millions of victims with maximum efficiency.

The professor crunched Arad’s numbers, which covered 480 train deportations from 393 locations, revealing what he called a three-month phase “of hyperintense killing.”

Stone calculated that at least 15,000 people were being murdered every day during a three-month period in August, September, and October of 1942.

“An unexpected outcome of the present time series reconstruction was the uncovering of the huge ‘burst’ of activity in mass killing,” Stone said in the research article, published in Science Advances. He added that “while Operation Reinhard lasted 21 months, these data show that the great bulk of the killing occurred in a huge pulse over the 3 months.”

Stone also believes the slaughter would have continued at a similar pace were it not for the fact that “the enormous pulse of death” during the period of highest intensity had “consumed the large majority of possible Jewish victims.”

“The Nazis’ extremely efficient extermination machine presumably could have continued to run smoothly for many more months at the kill rates identified here had there been a continuous supply of victims,” Stone said.

He said his research “highlights the singularly violent character of this genocidal event.”

Stone believes the data show that 1.47 million people were murdered in the gas chambers in the course of the three-month “pulse of death.”

If his calculations are correct, it would mean more people died in less time during that period than during any other 20th-century genocide.

“Operation Reinhard ran at a substantially higher kill rate for sustained time lengths, as compared to the Rwanda genocide,” he said.

Stone’s calculations reveal that the murder rate during Operation Reinhard was “approximately 83 percent higher than the commonly suggested figure for the kill rate in Rwanda.”

“The Holocaust kill rate is some 10 times higher than estimates suggested by authorities on comparative genocide,” said Stone.

Stone said despite the evident horror of the upwardly revised kill figures that his calculations reveal, he believes the actual murder rates are still higher.

He said his calculations were conservative estimates, and that “it should be emphasized that the numbers plotted represent a realistic minimum lower bound and that the reality was likely greater than indicated.”

“The true number of victims per day is quite likely to be greater,” Stone added, noting that his calculations didn’t take into account murders of Roma, also known as Gypsies, or other minority groups.

His figures also didn’t capture the 3 million non-Jewish Poles who were slaughtered during the war.