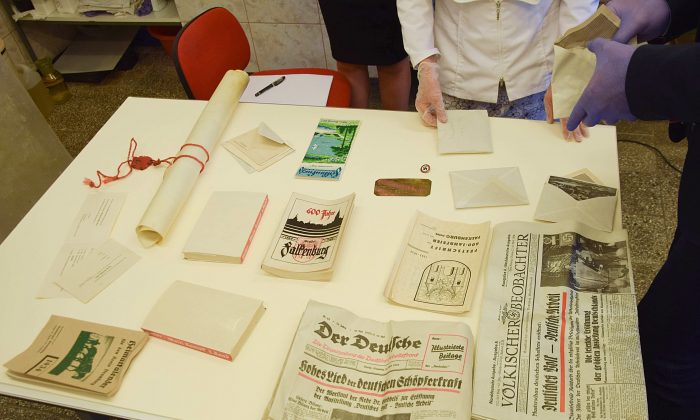 In this photo taken Sept. 13, 2016 at the National Museum's laboratory in Szczecin, Poland, the content is shown of a Nazi-era time capsule. The copper capsule was found Sept. 6, 2016 in the northwestern town of Zlocieniec, Poland, in the remains of the foundations of a Nazi training center that was built there in 1934, when the town was in Germany and was called Falkenburg. When opened on Sept. 13, the container revealed newspapers, photographs, the center's founding act on parchment and two copies of Hitler's 'Mein Kampf' which are lying with their back covers up, to conceal the title, as spreading Nazi ideas is not allowed in Poland. (AP Photo/Sebastian Kuropatnicki)
International

WARSAW, Poland—Nazi-era newspapers, coins, documents and copies of Hitler’s “Mein Kampf” have been found in a “time capsule” that was buried in 1934 in the foundations of a Nazi training center, a Polish town official said Tuesday.

Explorers in Zlocieniec, in northwestern Poland, dug for the copper cylinder at the remains of the former Ordensburg center’s foundations after learning it could hold a documentary movie showing celebrations of the town’s 600 years, in 1933. At the time, the city was in Germany and was called Falkenburg.

Sebastian Kuropatnicki, spokesman for Zlocieniec authorities, said Tuesday they were curious to see the movie and the town of the time.

When the container was opened Sept. 13, it held no film but did have the center’s 1934 founding act on parchment, a letter from a local banker indicating the location for the center, as well as coins, photos and two copies of Hitler’s book.

Kuropatnicki told The Associated Press that although the items document a “time of evil,” they have value for the town’s historians. Authorities are planning to organize a small museum using the items, but with a critical commentary on the Nazi ideology that led to World War II and the death of tens of millions of people.

Poland lost some 6 million citizens in the war, half of them Jews. After the war, borders were redrawn and Falkenburg became Zlocieniec.