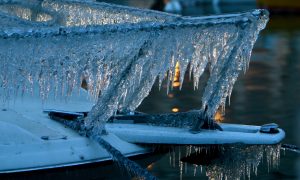 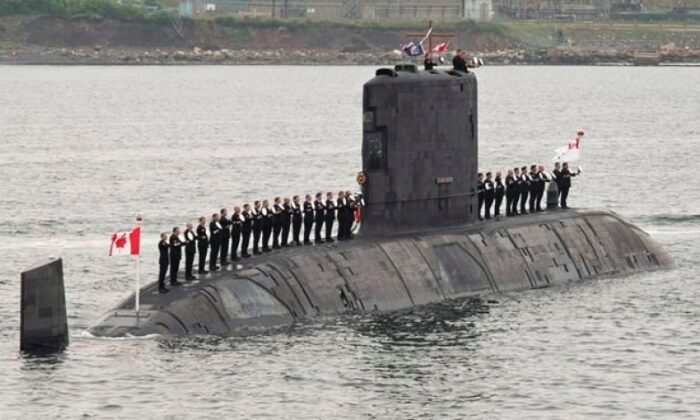 Sailors line up on Canadian submarine HMCS Corner Brook to salute Queen Elizabeth II during an international fleet review on June 29, 2010, in Halifax. An internal Defence Department report that says an errant test on one of Canada’s four beleaguered submarines last year caused permanent damage to the vessel that will continue to pose a risk over the long term. (Paul Chiasson/The Canadian Press)
Canada

OTTAWA—An internal Defence Department report has pulled back the curtain on the damage caused by an errant test on one of Canada’s four submarines last year, suggesting some of the damage is permanent and could continue to pose a risk over the long term.

Obtained by The Canadian Press through Access to Information, the report represents another setback for Canada’s four submarines, which have spent more time in repairs than at sea since being bought second-hand from Britain in 1998.

HMCS Corner Brook has been hit particularly hard, with the vessel docked for extensive repairs and maintenance for the past six years after striking the bottom of the ocean off B.C. in 2011. A fire also broke out while it was docked in Victoria in August 2019.

The report confirms that one of Corner Brook’s main ballast tanks ruptured last March during a test by Babcock Canada, which has been contracted to maintain and repair the sub fleet since 2008. The government recently extended Babcock’s contract to 2023.

“The test consisted of the tank being largely filled by water with air added to apply the required test pressure,” reads the Aug. 6, 2020 report prepared for the deputy minister of the Department of National Defence.

“After the tank successfully met this requirement, the final step was to drain the tank. This was intended to be done by gravity, however members of the test team attempted to accelerate drainage of the tank by re-applying pressure.”

“In doing so, they inadvertently over-pressurized the tank and caused it to rupture.”

Defence officials have previously said the incident would delay the Navy’s plans to get the Corner Brook back in the water. The submarine was supposed to return to service last summer, but will now remain docked until at least June.

Yet the report suggests even after repairs are done, some of the damage will be lasting and will need to be monitored by the Navy.

“A full repair of the damage is impractical and would not be economical,” the report reads. “There is the potential that the post-repaired condition will still present undesirable risk, in which case the residual risk will be presented to the Navy for acceptance.”

The report underscores the importance of maintaining the “structural integrity” of main ballast tanks to the safe operation of a submarine. They are used in controlling whether the vessel goes up or down in the water.

“Otherwise the submarine may not be able to surface (including surfacing from depth in an emergency due to flooding) or remain stable on the surface, either of which could lead to loss of the submarine,” the report reads.

Despite the damage, the report said the repairs and upgrades done to the Corner Brook since it was last in the water would see the submarine “in a significantly refreshed and modernized state, ready to operate for nine years.”

Canada’s top military procurement official said in an interview last week that the ballast tank was successfully tested recently and the plan remains to have the Corner Brook back at sea in the summer.

“When it goes to the sea, it will be safe and fit for purpose,” added Troy Crosby, the assistant deputy minister of materiel at the Department of National Defence.

“There’s always an ongoing monitoring happening, but … it’ll be safe, and it’ll be fit for purpose.”

Crosby would not speak to whether the submarine will be limited in what it can do, however. The military has previously imposed limitations or restrictions on other equipment, such as its Cyclone helicopters, after safety concerns were identified.

“The limitation that may be imposed on the submarine will … allow the submarine to do what it needs to do operationally with the Navy,” he said.

“It’s an awkward area simply because of the sensitivity around capabilities. We get into an area of sensitive information around operational capabilities that we just can’t get into the details.”

The report indicates that Babcock planned to “accept liability for the direct repair cost,” but that “indirect costs will be the subject of negotiations between Canada and [Babcock].” Crosby said there was no plan to sue the company for the mistake.

“The contractor is honouring their obligation,” he said. “They were very good about their response to that and we’ll have the submarine, as they say, repaired and we’ll move on from there.”

Questions about the benefits and costs of Canada’s submarines have circulated since Ottawa purchased the vessels second hand from Britain. The fleet was recently docked for more than a year, and the Defence Department says they cost $300 million a year to maintain.

Military officials, however, have called them critical to monitoring the waters off Canada’s coasts for potential adversaries. The Defence Department says HMCS Windsor and HMCS Victoria are now in the water undergoing tests after extended upgrades and repairs.