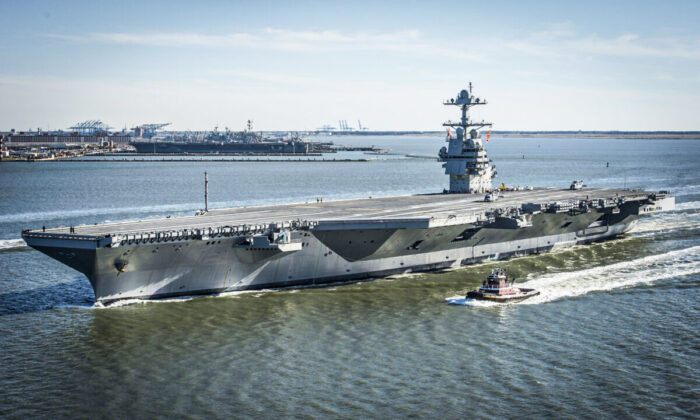 A Navy shipbuilding company has ended its vaccine mandate after workers threatened to quit and the Navy confirmed it didn’t require the mandate.

Huntington Ingalls Industries (HII), the parent company of Newport News Shipbuilding, is the world’s only manufacturer of the U.S. Navy’s nuclear-powered aircraft carriers. The company also serves as just one of two manufacturers of Virginia- and Columbia-class submarines, employing more than 25,000 workers in Virginia.

The shipyard had previously announced plans to require all 25,000 of its workers to be fully vaccinated by Dec. 8. The deadline was later moved to Jan. 4, to allow additional time.

The deadline has now been “suspended,” with the requirement ended.

“We have not wanted to lose a single employee to the virus, or to the effect of the mandate,” President and CEO Mike Petters wrote in a letter (pdf) to employees on Nov. 17.

“Importantly, with respect to Ingalls Shipbuilding and Newport News Shipbuilding, our customer has confirmed that our contracts do not include a requirement to implement the mandate. Technical Solutions employees are in a different situation and face varied requirements depending on the particular contract.”

The company continues to encourage employees to receive the COVID-19 vaccines, but no longer requires vaccination for employment.

Some employees told local outlet WTKR-News 3 that they felt tricked, saying they became fully vaccinated due to the mandate, which now no longer applies.

“They made me get it and then lifted it,” NII employee Deshawn Royal told the outlet. “I didn’t want to get it, but they said I had to get it or we were going to get fired. And then they lifted it. Y’all did us wrong.”

Another HII employee, Rodney Apop, said: “They went ahead and jumped, and they didn’t have the choice to do it.

“And now when they take [the mandate] away, they wish they had known so they didn’t have to.”

The move came just before USW Local 8888, the local shipbuilders’ union, released the results of its survey regarding a tentative contract agreement. The pact was rejected by a vote of 1,312–684.

“The best shipbuilders in the world expect more and deserve more from the company and want negotiators to return to the bargaining table and get it done,” the letter from the union reads.

The letter notes that the union is still prepared to strike if needed to forward its negotiations with company leaders.

Officials of the shipbuilders’ union didn’t immediately respond to a request by The Epoch Times for comment.