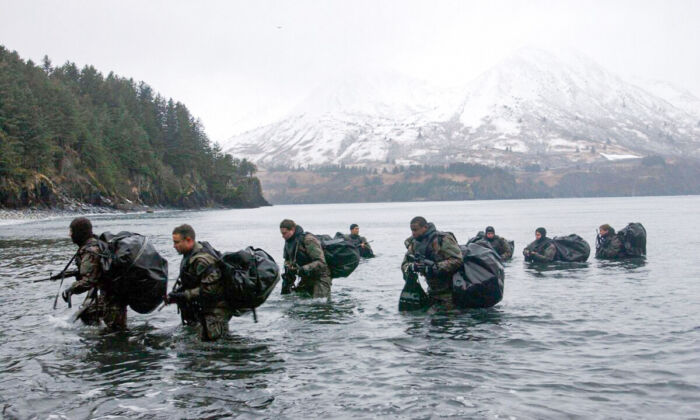 Navy SEALs perform Advanced Cold Weather training to experience the physical stress of the environment and how their equipment will operate, or even sound, in adverse conditions in Kodiak, Alaska on December 14, 2003. (Photo by Photographer's Mate 2nd Class Eric S. Logsdon/U.S. Navy via Getty Images)
US News

U.S. Navy SEALs will not be permitted to train in Washington state parks, pending a lawsuit that arose after residents raised concerns over seeing “armed men.”

The decision comes after attorneys for the Whidbey Environmental Action Network, who filed a lawsuit against the Washington State Parks and Recreation Commission in March 2021, argued in a legal brief last month that residents may feel on edge if Navy SEALs continue to use parks for training.

“It is difficult to find peace in the woods when armed frogmen might be lurking behind every tree,” they wrote, according to Coffee or Die magazine.

State parkland for military training had been used by the Navy since 2015 after the approval of a right-of-entry permit. That agreement to use five state parks expired in 2020, and when the Navy attempted to renew the contract, it asked to increase the number of state parks SEALs could train in to 28.

In response, local residents complained about the presence of the military in the areas.

“We use our parks for peace, solitude, getting back to nature, getting in tune with our family and ourselves. There is no need to use these spaces. Stop, just stop. This is a terrible idea,” the resident wrote during the public comment period (pdf).

“In these days of great division in our civil society, we don’t need stealthy men in camo uniforms toting toy guns around our State and County Parks,” another wrote. “People frequent parks to escape tension, not to encounter more. Keep the Navy commando training out of our parks!”

The Washington State Parks and Recreation Commission then voted to reduce the number of hours that Navy SEALs could train, and said some areas were off-limits.

The Whidbey Environmental Action Network’s March 2021 lawsuit cites residents’ fears, stating that they may avoid parks in the state in case they encounter “the proposed war games or being spied upon by Navy personnel.”

A hearing in the case has been scheduled for April 1 in Thurston County Superior Court.

The Epoch Times has reached out to the U.S. Navy for comment.