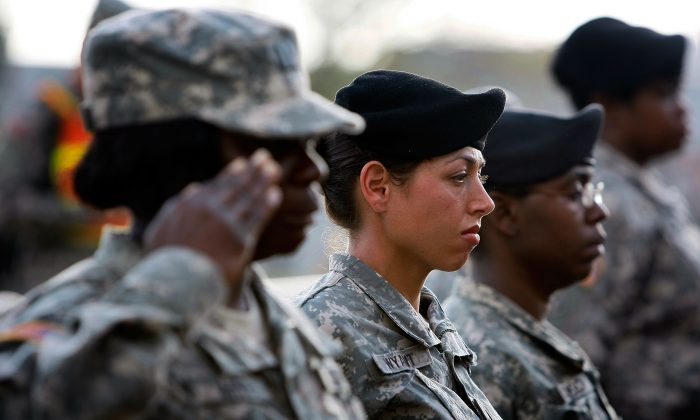 U.S. Army soldiers stand together as they salute during the memorial service in honor of the victims of the shooting rampage at Fort Hood, Texas. (Photo by Joe Raedle/Getty Images)
US

Although the identity of the candidate will remain confidential, the Navy has made public the enlistment of its first female applicant to its elite special operations team, the Navy SEALs. Special operations roles like these only opened to women last year. Despite that, women did not step up for the challenge until now, according to CNN.

But enlistment does not mean she will join the team immediately. She will first go through training designed to weed out unqualified applicants. Navy SEAL training is extremely difficult. Seventy-three percent of candidates don’t make it through, according to a Navy document.

Women have always been involved in the U.S. military, since the American Revolution. Four hundred women also fought in the Civil War dressed like men. In World War I and II women served critical functions as support staff, nurses, and administrative staff. But the roles officially open to women did not always put them in direct combat with enemies, and did not put them on the front lines with men. Over the years more military roles gradually opened to women.

Even while serving in noncombat roles, or roles that did not put them on the front lines, many women still ended up facing enemy fire, and many died. Former Secretary of Defense Ash Carter opened all combat roles to women in January 2016, as CNN reports.

Integrating women into the military and how to integrate women into more roles was a struggle during the Obama administration due to increasing reports of sexual assault. Current United States secretary of defense and former Marine Corps general, Jim Mattis said in 2015, “When you have to reduce standards—as you would have to do, you would have to do it—and when you would mix, you know, when you mix eros, when you mix affection for one another that could be manifested sexually, I don’t care if you go anywhere in history, you will not find where this has worked. Never has this worked.”

Whether this will be an issue in the U.S. Navy’s most elite teams is yet to be seen.