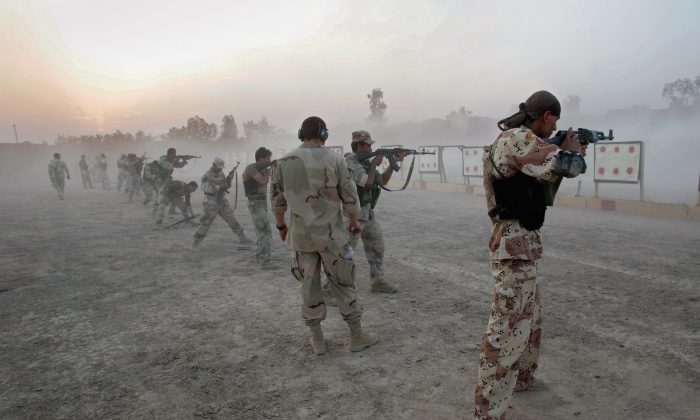 The decorated Navy SEAL, Eddie Gallagher, who is accused of war crimes in Iraq, will be moved to “less restrictive confinement” soon, President Trump announced on Saturday, March 30.

Trump’s announcement appeared to respond to what Rep. Ralph Norman (R-S.C.) said during a Fox and Friends interview on Friday.

“In honor of his past service to our Country, Navy Seal EddieGallagher will soon be moved to less restrictive confinement while he awaits his day in court. Process should move quickly!” Trump stated.

In honor of his past service to our Country, Navy Seal #EddieGallagher will soon be moved to less restrictive confinement while he awaits his day in court. Process should move quickly! @foxandfriends @RepRalphNorman

“This man spent 20 years of his life, he spent 15 of it as a SEAL, he volunteered to serve this country overseas, not once, not twice, but eight times and the least they can do is have him in confinement if they need be and let him have … medical treatment, let him get his proper legal defense team together,” Norman told Fox News during the interview.

Gallagher is accused of killing a teenage ISIS fighter under his care and then holding his re-enlistment ceremony with the corpse. Navy prosecutors also accuse Gallagher of shooting two civilians in Iraq and opening fire on crowds. Gallagher has pleaded not guilty to all the charges.

His lawyers have said he did not murder anyone and that disgruntled SEALs made the accusations because they wanted to get rid of a demanding platoon leader.

A military judge last month postponed Gallagher’s trial by three months after defense lawyers asked for more time to go over the prosecution’s evidence. The trial was reset for May 28.

He has spent six months in detention at Naval Consolidated Brig Miramar in California.

The SEAL insists he's innocent. The Navy keeps fighting his release from the brig.

On March 18, Rep. Dan Crenshaw (R-Texas) and 17 other House Republican members of the House sent a letter (pdf) to Navy Secretary Richard Spencer, raising concerns about the conditions of Gallagher’s confinement at a Navy brig in California.

Crenshaw is a retired Navy SEAL who lost sight in his right eye after being hit by an IED explosion in Afghanistan.

I joined 17 of my colleagues in asking the Secretary of the Navy to review the conditions of Chief Petty Officer Edward “Eddie” Gallagher’s pretrial confinement.

Everyone deserves access to basic needs while awaiting trial.

Read more about our efforts: https://t.co/Ru05widpQM

In the letter, the House members said Gallagher’s family and friends reported that he had not had sufficient access to his defense attorneys. They also said they got reports he was not receiving enough food or adequate medical care.

“Chief Gallagher is a decorated warfighter who, like all service members, is entitled to the presumption of innocence while awaiting court-martial,” the letter said.

“We therefore request that you review the underlying reasons for co-locating pretrial and post-trial confinees at Consolidated Brig Miramar and whether the current arrangement fundamentally disadvantages Chief Gallagher and other pre-trial service members. Furthermore, we request that you consider whether other locations are more appropriate for pretrial confinement,” read the letter.