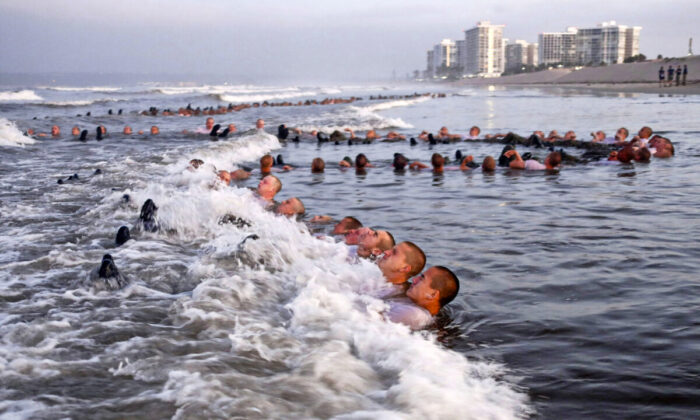 One Navy SEAL candidate died and a second was hospitalized after they completed the “Hell Week” that ends the first phase of assessment of the special operations force candidates.

Naval Special Warfare Command said in a statement to news outlets on Feb. 4 that the SEAL candidate’s cause of death is not yet known. The injured candidate is in stable condition at the Naval Medical Center San Diego, officials said.

The Navy confirmed on Sunday that 24-year-old Seaman Kyle Mullen died at Sharp Coronado Hospital in California on Friday.

“We extend our deepest sympathies to Seaman Mullen’s family for their loss,” Rear Admiral H.W. Howard III said in the statement. “We are extending every form of support we can to the Mullen family and Kyle’s BUD/S classmates,” Howard added.

The trainees “were not actively training when they reported symptoms and were transported to receive emergency care,” the Navy said.

“My prayers are with the family and loved ones of the deceased during this very difficult time, and I wish for a full recovery of the other candidate reported injured yesterday,” House Rep. Scott Peters (D-Calif.) said in a statement, local media reported.

He added: “These courageous, talented sailors were on their way to becoming some of our country’s most elite military personnel. We must find out what transpired so we can do whatever we can to keep others safe. In the days and weeks ahead, I look forward to learning more as the Navy conducts a thorough investigation.”

The last SEAL candidate to die during the assessment phase before the death on Feb. 4 was in 2016. James Derek Lovelace, 21, was treading water with his gear in a massive pool when an instructor pushed him underwater at least twice.

The San Diego County Medical Examiner initially ruled his death a homicide. The Navy said in 2017 that it would not pursue criminal charges after an investigation was carried out into Lovelace’s death.

An autopsy revealed that Lovelace had an enlarged heart and other health issues that may have contributed to his death.

Hell Week, which refers to a portion of the first part of SEAL training, “consists of 5 1/2 days of cold, wet, brutally difficult operational training on fewer than four hours of sleep,” according to a NavySeals website. “Hell Week tests physical endurance, mental toughness, pain and cold tolerance, teamwork, attitude, and your ability to perform work under high physical and mental stress, and sleep deprivation.”

“On average, only 25 percent of SEAL candidates make it through Hell Week, the toughest training in the U.S. Military,” it says.

“It is a miserable time, it is well-named,” said Paul Anderson, a retired Navy Seal Chief, FOX5 reported. “It’s a gut check. You get approximately four hours of sleep the whole week. You are constantly doing physical evolutions whether it’s physical obstacles, going in and out of the surf zone with your boats, running, you are constantly wet and you are always sandy.”

The Naval Special Warfare Command has launched an investigation into the death, said the military.