Navy Pilots Recall UFO Encounters: ‘There’s Something Out There That Was Better Than Our Airplane’ 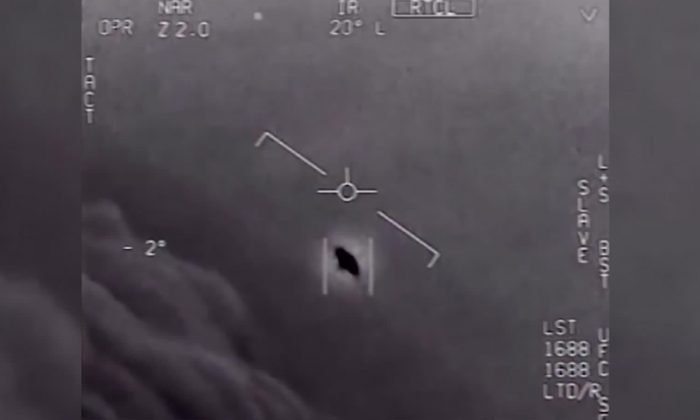 A UFO captured in declassified military footage. (Department of Defense/Screenshot via The Epoch Times)
By Samuel Allegri

One month before the director of national intelligence and secretary of Defense are expected to deliver a UAP (unidentified aerial phenomena) intelligence report, Navy pilots and other former government officials are speaking out and describing their encounters with the mysterious sightings.

David Fravor, a Top Gun naval flight school graduate and commander of the F/A-18F squadron on the USS Nimitz, appeared on CBS’ “60 minutes” with Lt. Alex Dietrich, who was flying at his wing in 2004 when they say they saw a UFO, or unidentified flying object, together with their back seaters.

Fravor said that they say something “better” than their airplane. Dietrich said she never wanted to appear on national television, and this was her first time talking about the subject.

The UFO encounter, which happened 100 miles southwest of San Diego, California, was documented by means of radar, camera, and four naval pilots.

It came after a new advanced radar on the USS Princeton had been detecting “multiple anomalous aerial vehicles” for a week, according to operators. The “vehicles” were able to descend over 80,000 feet in less than one second.

Fravor and Dietrich were sent along each with back seat weapons officers on Nov. 14, 2004, to investigate.

They spotted an unidentified object with no wings or markings in an area of roiling whitewater amid a placid ocean.

“So as we’re looking at this, her back-seater says, ‘Hey, Skipper, do you…’ And about that got out, I said, ‘Dude, do you, do you see that thing down there?'” Fravor recalled. “And we saw this little white Tic Tac-looking object. And it’s just kind of moving above the whitewater area.”

Dietrich circled atop while Fravor directed the F-18’s nose toward the object to get a better view, spiraling toward it.

“The Tic Tac’s still pointing north-south, it goes, click, and just turns abruptly. And starts mirroring me. So as I’m coming down, it starts coming up,” he said, adding that the object was about the size of his aircraft, but it had no markings, no exhaust plumes, and no wings.

The UFO was aware of their presence, as it was mimicking his moves, Fravor said.

“I want to see how close I can get. So I go like this. And it’s climbing still. And when it gets right in front of me, it just disappears.” he said. “Disappears. Like, gone.”

He further remarked, “There was four of us in the airplanes literally watching this thing for roughly about five minutes,” adding that they later said to each other that if they saw the UFO on their own they would have probably kept quiet about it, “because it sounds so crazy when I say it.”

“I don’t know who’s building it, who’s got the technology, who’s got the brains. But there’s, there’s something out there that was better than our airplane.”

The pilots filed reports, but nothing was done for five years, until Luis “Lue” Elizondo, former head of the U.S. government’s Advanced Aerospace Threat Identification Program, decided to investigate.

“We spend millions of dollars in training these pilots. And they are seeing something that they can’t explain. Furthermore, that information’s being backed up on electro optical data, like gun camera footage. And by radar data. Now, to me, that’s compelling,” Elizondo said.

The findings were met with doubt inside the Pentagon, but Chris Mellon, former deputy assistant secretary of defense for intelligence for two presidents, weighed in.

“So it’s not us, that’s one thing we know,” Mellon, who had access to top-secret government information, said. “I can say that with a very high degree of confidence in part because of the positions I held in the department, and I know the process.”

He later declassified and leaked three Navy videos to the New York Times.

“It’s bizarre and unfortunate that someone like myself has to do something like that to get a national security issue like this on the agenda,” he said.

Another UFO witness, Lt. Ryan Graves, a former Navy pilot, says he spotted UAPs for years with both radar and infrared.

Graves said he saw a rotating, airborne object with no exhaust plumes.

“Pretty hard to spoof that,” he said. “You have rotation, you have high altitudes.  You have propulsion, right? I don’t know. I don’t know what it is, frankly.”