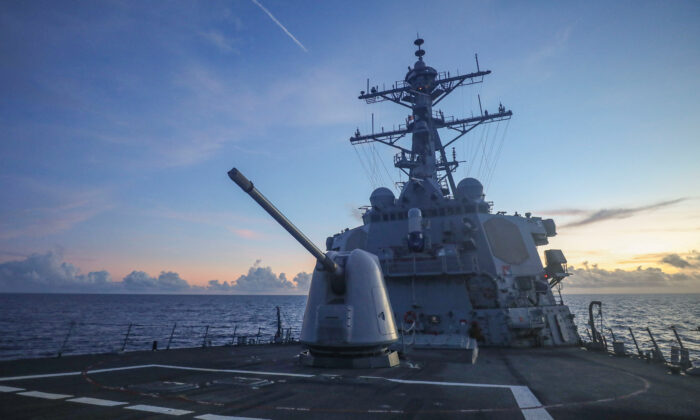 The U.S. Navy faces serious limitations on its shipbuilding output due to a weak industrial base and budget cuts; consequently, it’s facing having to rework its strategy. It must work smarter to counter China, Chief of Naval Operations Adm. Michael Gilday said at the Heritage Foundation at an Aug. 25 briefing.

China’s navy is now the largest in the world. The Chinese warship building plan continues apace. Reports show it’s presently building six destroyers at a time. By contrast, getting the U.S. fleet to building three destroyers per year is just a wish according to Gilday. Currently, the United States produces between one and two destroyers annually.

“We need to give a signal to industry that we need to get to three destroyers a year, instead of 1.5, that we need to maintain two submarines a year. And so part of this is on us to give them a clear set of—a clear aim point so they can plan a work force and infrastructure that’s going to be able to meet the demand. But again, no industry is going to make those kinds of investments unless we give them a higher degree of confidence.”

The backlog of new projects to “restore, renovate, or replace” facilities at the four publicly owned shipyards run by the Navy had increased by $1.5 billion over the past five years, a report by the General Accountability Office (GAO) from last May found. It has a $1.8 billion backlog (pdf) in deferred maintenance on its existing surface ships. That’s not counting (pdf) the anticipated costs of accommodating maintenance of new classes such as the Virginia-class attack submarines and Columbia-class ballistic missile submarines, or the new Ford-class carriers. Dry docks that accommodate the decommissioning Los Angeles-class submarines will be obsolete within the next 10 to 15 years.

Nearly $1 billion has been spent to modernize Ingalls Shipbuilding’s shipyard in Pascagoula, Miss., which builds the Arleigh Burke-class destroyers and other warships including the Zumwalt-class USS Lyndon B. Johnson.

The Navy’s new Constellation class frigates are ramping up production starting this year. The Navy has serious problems it needs to rectify.

“We noted that programs had an imbalance between the capabilities the Navy sought to acquire and the resources planned to execute the programs. As a consequence of these conditions, Navy shipbuilding programs regularly faced cost and schedule growth before ships were accepted into the fleet. Further, we found that cost growth contributed to the erosion of the Navy’s buying power over the 10-year period, with ship costs exceeding estimates by over $11 billion during this time frame,” the GAO said in an April report (pdf).

“In July 2017, we found that problems with quality, completeness, and reliability persisted when ships were turned over to the Navy’s fleet.”

The U.S. Navy plans (pdf) to deploy upwards of 150 unmanned vessels controlled by artificial intelligence by the 2040s, according to its 2022 Navigation Plan. Gilday said the Navy hopes to have 373 manned ships by 2045. It also includes plans to place hypersonic missiles on the stealthy Zumwalt-class destroyers that until now have been a platform in search of a mission starting in 2025. Gilday noted the Navy also plans to place lasers or microwave beam weapons on its warships to counter enemy hypersonic missiles that are too fast for conventional defenses such as the Phalanx or SM-2 missiles to intercept.

The Arleigh Burke-class destroyer USS Preble recently became one of the first ships in the fleet armed with the HELIOS laser defense system that’s undergoing testing. Unlike conventional munitions, energy weapons have an unlimited magazine capacity and cost less.

It could take at least 20 years to achieve the mixture of manned and unmanned vessels that the Navy hopes to achieve, but that could be too little, too late to prevent China from taking Taiwan. Some estimates suggest that Xi Jinping could move on Taiwan between now and the 2024 election.

China’s exercises last month around Taiwan showed that its capacity to blockade Taiwan and threaten Japan is on the rise. The United States has enjoyed naval supremacy since World War II, but the latest developments had the U.S. Navy looking like the underdog. Gilday noted that the current U.S. fleet is too small and spread across too few platforms to effectively confront the Chinese. It needed to be spread out more effectively “from the seabed to space,” Gilday said.

“There are plenty of lessons to be learned from Russia-Ukraine and among them are you need to come at an adversary differently than traditionally you would have in the past,” Gilday said. “We’ve provided them with Javelin missiles, so you’ve just got to think of better ways to get after the problem quicker.”

These shortcomings mean the Navy must compensate by increasing its focus on fleet assets it deploys in the Western Pacific. It requires an increased focus on artificial intelligence and unmanned platforms, and a focus on interoperability with allied fleets.

An emphasis on stealth and electronic warfare is crucial in a fight with China considering that the Chinese navy has covered the South China Sea in sensors, radars, and jammer equipment.

“The key to speed in contemporary warfare is the transformational capabilities of cyberspace, both offensive and defensive. The growth of sensor awareness is also crucial, especially for more rapid and assured gathering of data about the targets that must be located, tracked, and attacked. But because military operations in the traditional domains of warfare—air, land, and sea—are dependent on data networks in cyberspace, it has become the controlling domain in warfare,” Sestak wrote.

“The capability to access, exploit, use, misuse, damage, render useless, or just gain information from within battle data networks and netted systems whenever needed is what actually allows for an immediate sanctuary for one’s forces while denying it to an adversary. …

“The failure to command this new domain of cyber warfare could ultimately mean a lack of relevance for naval force structure, at least against a peer competitor.”

Information is power, and how your force is deployed and knowing where your enemy is becomes key to victory.

Russia-Ukraine also showed the value of international coalitions in the face of aggression. Gilday hopes to increase cooperation with America’s allies such as India, Japan, Australia, the United Kingdom, and so forth as a force multiplier.

He worries that the next Pearl Harbor attack could come from space or through cyberspace, and the Navy is working to meet that challenge. But in the case of a shooting war, the Navy’s shipyard capacity could be its undoing.