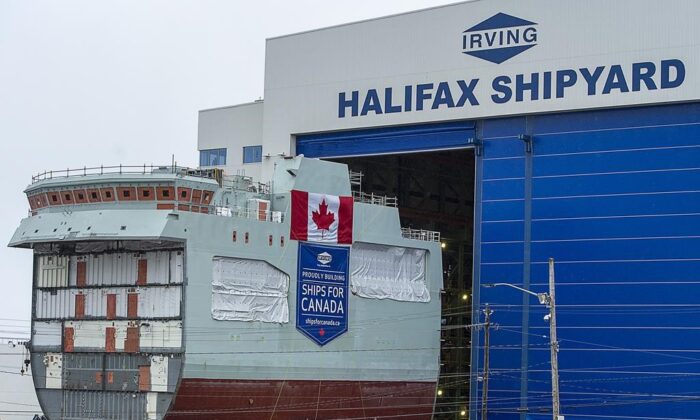 The centre block of the future HMCS Max Bernays is moved from the fabrication building to dockside at the Irving Shipbuilding facility in Halifax on Friday, Jan. 22, 2021.The vessel is Canada's third Arctic and Offshore Patrol Ship (AOPS) being built for the Royal Canadian Navy. (Andrew Vaughan/The Canadian Press)
Canada

OTTAWA—Retired vice-admiral Mark Norman is warning the Royal Canadian Navy to start preparing for some hard discussions as delays and escalating costs continue to buffet the country’s $60-billion plan to build new warships over the coming decades.

The Department of National Defence revealed this week that the first of 15 new warships being built to replace the Navy’s 12 frigates and three already-retired destroyers will be delivered in 2030 or 2031, years later than planned.

News of the schedule slip comes ahead of a highly anticipated update from the parliamentary budget officer on the cost of the overall project, though defence officials have maintained the $60-billion budget set in 2017 remains sufficient.

While the department’s assertions are encouraging, Norman told The Canadian Press on Tuesday that there is a direct correlation between delays and cost increases when it comes to military procurement projects.

And while Norman hopes it doesn’t reach that point, the former navy commander and vice-chief of the defence staff suggests officials should nonetheless start getting ready for pressure to scale back the number or quality of new ships.

“These are all conversations that I think legitimately, at some point, are going to have to happen,” Norman said. “To pretend that they’re not going to happen is naive. This is all about tradeoffs at the end of the day.”

For his part, Norman is firmly in the camp that if the conversation comes down to significant cuts to the new warships’ capabilities or building fewer vessels to save billions of dollars, quality should trump quantity.

“There’s only so much blood you can get from that rock or you end up producing something which isn’t really a frontline warship anymore,” he said. “And ultimately, that’s what this is all about.”

The new warships to be built in Halifax are based on the British-made Type-26 and are to be the backbone of the navy for decades. The project, which originally had a budget of $26 billion, is the largest military procurement in Canadian history.

The Type-26 will replace the navy’s existing fleet of 12 Halifax-class frigates as well as its three Iroquois-class destroyers, which were retired several years ago. Those two classes had different roles and abilities, which the Type-26 will be expected to adopt.

The decision to combine the two classes into one is part of why the current project is so complicated, said Norman. It is also why there is only so much flexibility when it comes to the systems and capabilities that are to be built into the Type-26.

The federal Liberal government has committed to building 15 new warships as part of its defence policy, which was unveiled in June 2017 and increased the project’s budget from $26 billion to $60 billion.

The ships are being ordered in batches and defence officials say they are still working on the exact numbers. Such an approach gives the government flexibility to cut back on the numbers later if it wants.

All eyes are currently on the upcoming report from the parliamentary budget officer, which is to be released later this month and provide an updated cost for the Type-26 along with estimates for purchasing two other warships.

The report could kickstart fresh debate around the Type-26 and Ottawa’s decision to build the ships in Canada, particularly given a French-Italian consortium’s assertion that it could build a new fleet faster and cheaper in Europe.

Norman, who is on record saying the navy needs at least 10 new warships but he hopes it gets all 15, said restarting the process or “throwing the whole thing out, the baby with the bathwater, is a very bad idea.”

At the same time, he warned that Canadians need to be careful when comparing the costs of different ships and proposals. To that end, he lamented that the government and military were not more forthcoming with information about the project.

This week’s revelation about the delay in delivery of the first Type-26 was the first real update from the Defence Department and government on the warship project in many months.

“To me that’s partly what’s missing in the public discourse around this, is the degree of information, explanation, context,” Norman said.

“We just seem to be presented with a series of facts or information presented as fact. And there doesn’t seem to be a particularly sophisticated discussion ongoing about what that really means going forward.”

Irving Shipbuilding president Kevin McCoy defended the Type-26, saying the vessels will be much more capable than the class of frigates currently being built by the United States, which has a variety of warships in its fleet.

“We acknowledge that there are less expensive ships in the global market,” McCoy said in a statement, “but they do not meet Canada’s stringent combat requirements for a multi-mission ship to execute a full range of stressing missions and ensure the safety of the crew in a potential conflict.”