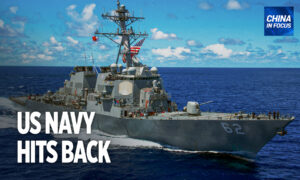 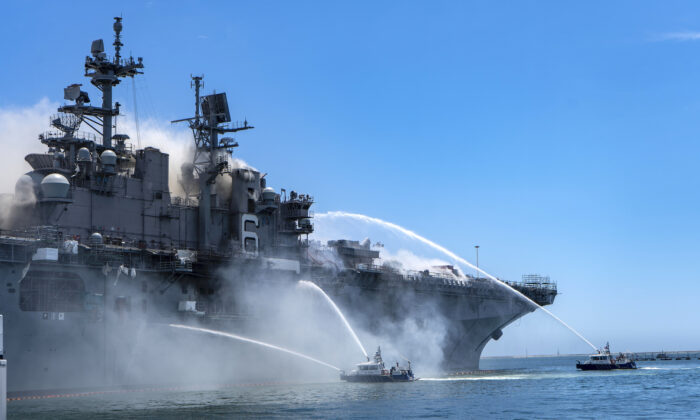 Navy Must Focus More on Warfighting and Less on Diversity Training: Report

When announcing the christening of the USNS John Lewis replenishment oiler on July 16, Acting Secretary of the Navy Thomas Harker said sailors will be “galvanized” by the legacy of the new ship’s namesake.

“Leaders like Representative Lewis taught us that diversity of backgrounds and experiences help contribute to the strength of our nation,” Harker said, referring to the late congressman and civil rights activist.

But some lawmakers and military officials worry that comments such as the ones made by Harker are part of a larger problem of Navy leadership prioritizing social issues at the expense of military preparedness.

A congressionally commissioned report released on July 12 suggests that an overfocus on administrative tasks correlates with recent Navy mishaps, including the July 2020 fire on the USS Bonhomme Richard, two deadly collisions in 2017, and the January 2016 surrender of two small Navy craft to Iran in the Arabian Gulf.

Drawing on interviews with 77 Navy personnel, the report found “a broad consensus across interviewees on numerous cultural and structural issues that impact the morale and readiness of the Navy’s surface force.”

“These include: an insufficient focus on warfighting skills, the perception of a zero-defect mentality accompanied by a culture of micromanagement, and over-sensitivity and responsiveness to modern media culture,” said the report, drafted by retired Marine Corps Lt. Gen. Robert Schmidle and retired Navy Rear Adm. Mark Montgomery at the direction of Sen. Tom Cotton (R-Ark.) and Reps. Mike Gallagher (R-Wis.), Jim Banks (R-Ind.), and Dan Crenshaw (R-Texas).

The report makes clear that many of the Navy’s problems have existed for decades, including a lack of resources and consistency in warfare training programs as well as an “underwhelming” commitment to surface ship maintenance. An overall atmosphere of complacency is due in part to the Navy not having a credible rival since the Cold War, the report suggests.

Along with identifying general problems associated with a bloated bureaucracy, the report focuses on the more recent trend of Navy leadership becoming entranced by social issues. Programs to encourage diversity, suicide prevention, sexual assault, and other issues have their value—but an overfocus on those areas comes at a cost, the report said, quoting numerous officers.

“We’ve got so many messages about X, Y, Z appreciation month, or sexual assault prevention, or you name it. We don’t even have close to that same level of emphasis on actual warfighting,” said an unidentified recent destroyer captain.

“Sometimes, I think we care more about whether we have enough diversity officers than if we’ll survive a fight with the Chinese navy,” said an active-duty lieutenant. “It’s criminal. They think my only value is as a black woman. But you cut our ship open with a missile and we’ll all bleed the same color.”

The report did cite one officer who went on the record in favor of the ramped-up HR training. Commander Bryan McGrath said he didn’t like such programs at first, but later came to see their value.

“When you’re on the ship, [the] sexual assault and victim stuff, all that stuff just seems like a burden. It just seems like it’s never-ending,” McGrath said. “[But] the further I get from it, the more I understand why it’s important and why there does have to be very clear signals sent to deck plate sailors that they’re, you know, that issues that are important to them are important to leadership.”

But overall, about 94 percent of the respondents said they believe that incidents such as Iran’s capture of the sailors are related to a broader leadership problem in the Navy, and 55 percent said they believe the overfocus on administrative tasks and cultural issues is directly related to the recent mishaps. The report doesn’t say how the sample of respondents interviewed was chosen.

The report makes eight recommendations to address the abovementioned concerns, including investments in warfighting training and ship maintenance, as well as a renewal of the Navy’s “noble tradition of remaining out of politics.”

“Limit social media accounts and activities by Navy officials, discourage use of toxic platforms by sailors, remove all political and sociological topics from Professional Military Education and replace them with essential warfighting courseware,” the report advised.

In response to the report, Navy spokesperson Patricia Kreuzberger told The Epoch Times: “We welcome the insights and report findings, many of which are consistent with areas we have addressed and taken action on.

“We look forward to continuing our work with Congress to ensure we have the most capable ships crewed by the most capable sailors, as well as a surface force that is fit for the challenges of the 21st century.”

The Navy indeed has ramped up training efforts since two deadly ship collisions in 2017, including with a planned $40 million surface ship training center set to open later this year, according to The San Diego Union-Tribune.

Nevertheless, Cotton said on July 12 that he found the report “very concerning,” while Banks called for a total change in priorities.

“This report depicts a Navy leadership that’s distracted from the number one threat to American national security: The Chinese Communist Party,” Banks said. “As China’s Navy exceeds ours in size, the U.S. Navy must be ready to face any threat.”