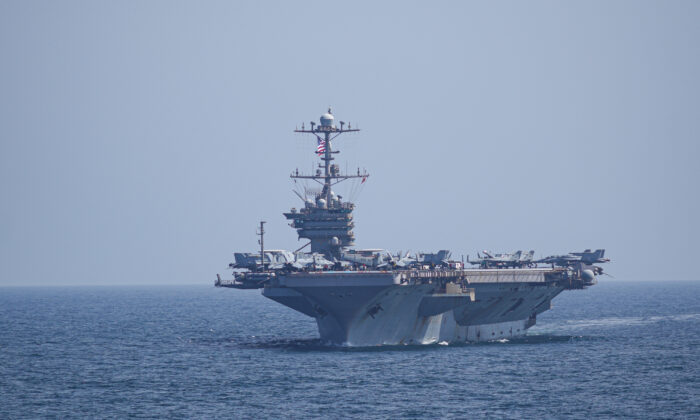 Despite finishing deployment, the USS Harry S. Truman carrier group will remain at sea in the western Atlantic, safe from the reaches of COVID-19 and ready for action, the Navy announced.

“The ship is entering a period in which it needs to be ready to respond and deploy at any time,” Vice Adm. Andrew Lewis, commander U.S. 2nd Fleet said in a statement. “Normally we can do that pierside, but in the face of COVID-19, we need to protect our most valuable asset, our people, by keeping the ship out to sea.”

The Navy’s announcement on Monday follows the death of a sailor in the Pacific who was on board the virus-stricken USS Theodore Roosevelt, which is currently sidelined in Guam with over 500 sailors testing positive for the CCP (Chinese Communist Party) virus, commonly known as novel coronavirus.

The USS Harry S. Truman has already completed two back to back deployments, according to UNI News, and is now the only on-call carrier strike group on the East Coast.

“After completing a successful deployment we would love nothing more than to be reunited with our friends and families,” said Rear Admiral Andrew Loiselle, commander of Carrier Strike Group 8, in a statement.

“We recognize that these are unique circumstances and the responsible thing to do is to ensure we are able to answer our nation’s call while ensuring the health and safety of our Sailors. We thank you for your continued love and support as we remain focused on this important mission.”

The Navy said that it will continue to monitor what it describes as a “dynamic situation” and to provide an update in three weeks for sailors and loved ones ashore.

The Navy is better placed to absorb the uncertainty because of a shift toward a more flexible deployment strategy brought in two years ago to keep adversaries guessing.

On Monday, the Navy announced that a sailor assigned to the virus-stricken USS Theodore Roosevelt had died, four days after he was found unresponsive and was admitted to intensive care.

The carrier is currently sidelined from its mission in the Pacific while the nuclear carrier is systematically evacuated and cleaned after an outbreak of COVID-19 on board.

So far, 585 members of the crew of over 4,000 have tested positive, according to a statement on Sunday, with 92 percent tested.

The death of the crew member marks the first death of military personnel on active duty from the CCP virus.

A dramatic memo from the captain to the leadership about the outbreak was leaked to the press, sparking a series of controversial events which saw the dismissal of the captain, and the resignation of Acting Navy Secretary Thomas Modly.