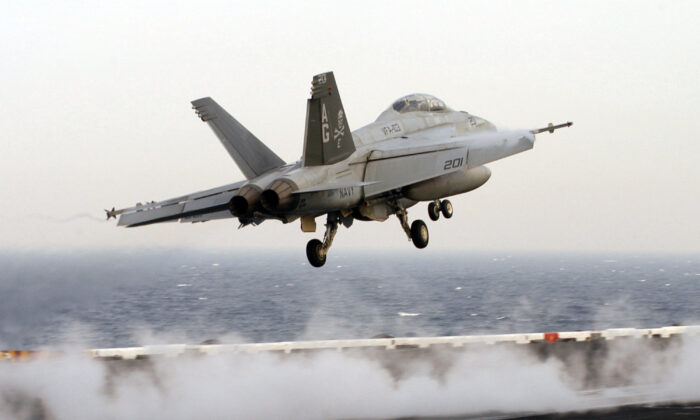 In this file photo, an F/A-18F Super Hornet launches from the flight deck of Nimitz-class aircraft carrier USS Dwight D. Eisenhower, in the Persian Gulf, on March 27, 2007. (Travis Alston/U.S. Navy via Getty Images)
US News

The F/A-18F Super Hornet went down at about 3 p.m. Monday. It was assigned to nearby Air Test and Evaluation Squadron (VX) 9, based at Naval Air Weapons Station China Lake, a Navy statement said.

The crash was in a remote southern area of the park in California’s Mojave Desert near the Nevada border and nobody on the ground was hurt.

The pilot was treated at a hospital in Las Vegas and released, the Navy said.

The crash was under investigation.

On July 31, 2019, another Navy Super Hornet crashed in Death Valley National Park during a routine training mission, killing the pilot and slightly injuring seven park visitors who were struck by debris.

They had gathered at a scenic overlook about 160 miles where aviation enthusiasts watch military pilots speeding low through a chasm dubbed Star Wars Canyon, officials said.

Last October, a F/A-18E Super Hornet from Naval Air Station Lemoore in California’s Central Valley went down during a training mission in the Mojave Desert but the pilot safely ejected.