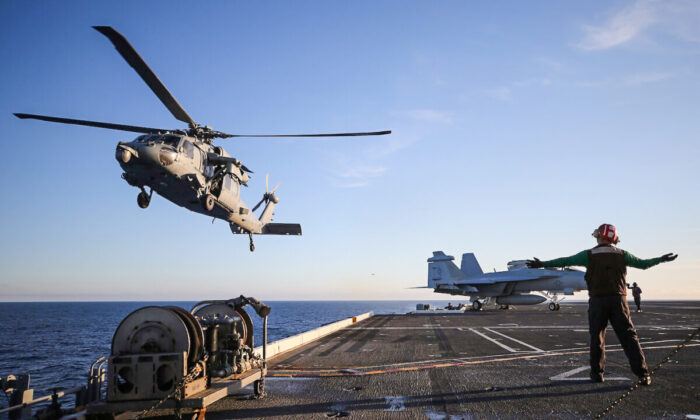 A U.S. Navy MH-60S helicopter descends to land on the flight deck of the USS Nimitz aircraft carrier while at sea off the coast of Baja California, Mexico, on Jan. 18, 2020. (Mario Tama/Getty Images)
Southern California

At least one rescued
By Mimi Nguyen Ly

A U.S. Navy helicopter crashed into the Pacific Ocean off the coast of Southern California during a routine flight on Tuesday.

The Navy’s U.S. Pacific Fleet announced on Twitter that an MH-60S helicopter that crashed around 4:30 p.m. local time, about 60 nautical miles off the coast of San Diego.

It had been aboard the USS Abraham Lincoln aircraft carrier before carrying out “routine flight operations” just before the crash.

One crew member was rescued, according to an update at 11:00 p.m. local time.

“Search and rescue operations are ongoing with multiple Coast Guard and Navy air and surface assets,” according to the U.S. Pacific Fleet. “Abraham Lincoln is homeported in San Diego.”

The MH60S chopper typically carries a crew of four.