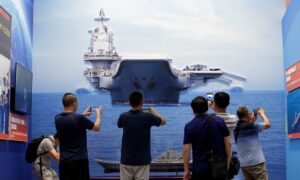 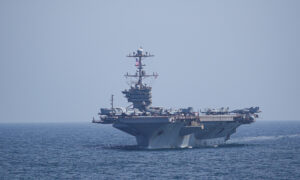 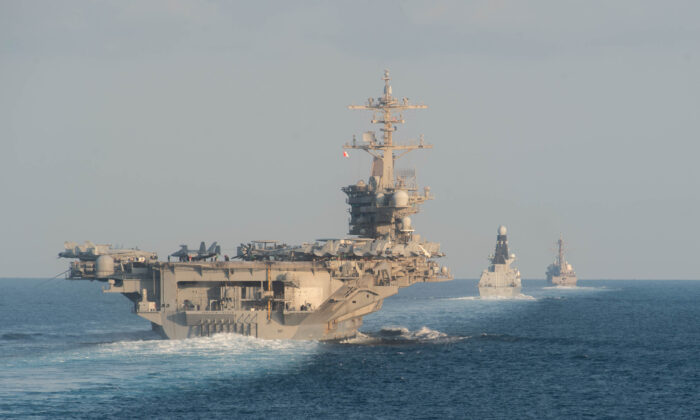 Navy Boasts of 6 Carriers At Sea, Despite One Sidelined by COVID-19

Six aircraft carriers are now at sea, according to the Navy, despite the USS Theodore Roosevelt being still benched by COVID-19 in Guam.

The United States has 11 carriers in total, but typically fewer than half are deployed.

“The U.S. Navy has six carriers underway right now. Truman, Eisenhower, Reagan, Nimitz, Lincoln, and Ford all operating where ships belong … at sea,” wrote the Chief of Naval Operations on Twitter on May 10, describing the  Navy as a “force to be reckoned with.”

The U.S. Navy has been adapting to the challenges of the pandemic, taking lessons from the outbreak on board the USS Theodore Roosevelt, which is now reembarking sailors after being sidelined for nearly two months in Guam.

The Pentagon is prioritizing making sure crews are virus-free when they head out on deployment, which means concentrating testing and quarantine in the time window just before deployment.

For example, the Navy said that the carrier USS Nimitz set sail for training on April 27, but only after a 27-day quarantine period and testing all of the crew.

The latest carrier to head out to sea was the USS Lincoln, which left the dock in San Diego on May 7, according to the carrier’s Facebook page.

Carrier deployments are no longer announced in advance, under a new strategy brought in under the Trump administration to keep adversaries guessing.

One carrier, the USS Truman, has remained off the Atlantic coast despite coming to the end of its previous deployment, to keep the crew COVID-free.

When the USS Theodore Roosevelt was first benched by the outbreak in March, there were only two other carriers at sea at the time.

Around 20 percent of the crew on the Theodore Roosevelt was ultimately found to have been infected.

The Navy is no longer providing detailed updates on the number of crew infected or recovering. The ship has been cleaned and the crew is being systematically reembarked and tested.

A sailor assigned to the carrier was so far the only active-duty member of the armed services to die from the CCP virus.

One of the 6 carriers, the USS Ford, is a new class of carrier and is still undergoing testing.

U.S. military leaders, civilian and uniformed, have insisted that military readiness remains high despite the pandemic, warning adversaries not to test them.

While a few analysts believe there has been an uptick in aggression from Beijing due to the pandemic, others say it is too early to tell, especially given the difficulty in assessing the potential impact on the Chinese military.

U.S. military leaders have noted that Chinese military aggression in the South China Sea has continued during the pandemic, in line with previous trends. Russia’s usual probing for U.S. military weakness has also continued.

However, so far, the Pentagon has dismissed suggestions that the pandemic has shifted strategic dynamics or sparked any uptick in military aggression.