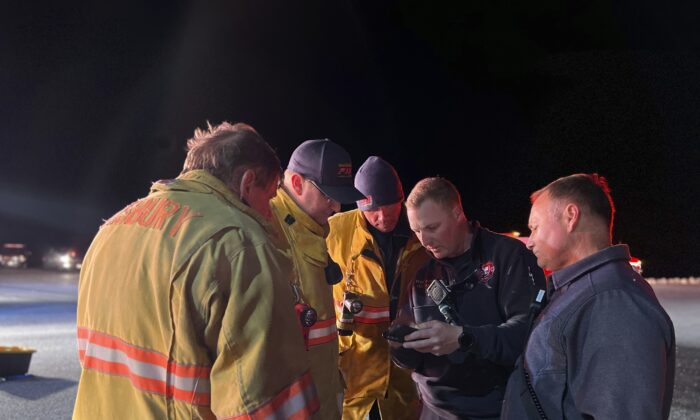 Emergency workers confer near Stockton, Md., on March 30, 2022, after a U.S. Navy E2-D Hawkeye aircraft crashed in waters near the Eastern Shore boundary of Virginia and Maryland. (Ryan Whittington/Ocean City Fire Department via AP)
US News

One person has been killed and two others rescued after a U.S. Navy aircraft crashed in Virginia waters on Wednesday evening, according to local reports.

Myers confirmed the fatality and the rescue of the two remaining people on board.

The Coast Guard told Fox News that it received a call to assist around 7:30 p.m. on Wednesday. The time of the crash on the eastern coast of Virginia near the Maryland border remains unclear.

A spokesperson for the Coast Guard told the news outlet that it dispatched a motor lifeboat from Chincoteague and a helicopter from Elizabeth City to the scene.

According to WAVY, two people were found injured on the top of the wreckage. Naval Air Force Atlantic Public Affairs said the pair do not have life-threatening injuries.

The two people who were rescued had broken legs, and the third was last seen strapped in for flight and went down with the aircraft, the local Coast Guard told WRIC in Richmond.

The injured pair were taken to the Wallops Flight Facility, and subsequently transported to Tidal Health Hospital in Salisbury, Maryland, DailyMail.com reported.

The identity of the crew member killed in the incident will be released once the next of kin has been notified.

Keith Koehler, a spokesperson at the Wallops Island NASA facility, told WRIC that its emergency personnel was responding to the situation.

According to Shore Daily News, a call was issued over the emergency radio for anyone in the Virginia waters to lookout for survivors.

Democratic Rep. Elaine Luria said in a statement on Twitter that she was continuing to monitor the crash.

“I’m keeping our naval aviators, their families, and our first responders in my thoughts and prayers tonight as rescue and recovery efforts continue,” Luria said.

A spokesperson for Virginia Gov. Glenn Youngkin said his office is monitoring the situation.

“The governor is monitoring the situation,” the spokesperson told WRIC-TV. “The governor and the First Lady are keeping the aviators, their families, and the first responders in their thoughts and prayers.”

The Navy said the incident is under investigation.

The Epoch Times has contacted the Naval Air Force Atlantic for additional comment.

In a separate incident in Virginia on Jan. 12, one person was injured after a Navy Seahawk helicopter was forced to make an emergency landing near Smithfield, the Navy said.

“We can confirm that a Navy MH-60S helicopter experienced a hard landing in a field in the vicinity of Smithfield, VA,” Myers said in a statement at the time.