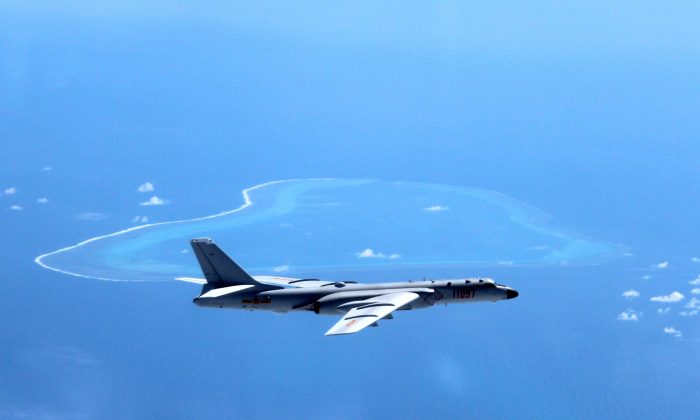 A Chinese H-6K bomber patrols the islands and reefs in the South China Sea. (Liu Rui/Xinhua via AP)
Opinion

For over two years, the United States and the West struggled to counter the Russian “wolf” at the front door. We’ve fought to constrain revanchist Putinism in Georgia, Crimea, and Ukraine while coping with Moscow’s Assad-Syria support and Assad’s repressive government.

At the same time, we largely ignored the yapping puppy (China) at the back door, assuming that territorial conflicts in the South China Sea could be managed by legal judgments and diplomatic demarches. Our hope was that Beijing would “play nice” on such tertiary issues.

Consequently, after much pulling-and-hauling between the United States, the EU, and NATO, we believe that the projected deployment of NATO battalions in Estonia, Latvia, Lithuania, and Poland has convinced Moscow there will be “no free lunch” from an influx of “little green men” against these NATO members.

Regarding Syria, we implicitly accept Assad’s survival and more explicitly agree that NATO/West will cooperate with Russia in the effort to destroy the Islamic State/ISIL/ISIS/IS/Daesh with only peripheral whining over Damascus’s human rights violations.

However, the international rule-of-law/navigational contretemps in the South China Sea is no longer a yappy Beijing Pekingese but rather a snarling pit bull whose potential for regional disruption appears limitless.

The international rule-of-law contretemps in the South China Sea is no longer a yappy Beijing Pekingese but rather a snarling pit bull whose potential for regional disruption appears limitless.

In some respects, the South China Sea issue is straightforward: Beijing through a “nine-dash line” claims sovereignty over almost all islands, reefs, and rocks in the sea; some of these are hundreds of miles from the Chinese mainland. It has built military facilities on these islands to reinforce claims. Other states, however, the Philippines, Brunei, Malaysia, Vietnam, and Taiwan, have competing claims over specific territory.

Following Chinese seizure in 2013 of Scarborough Shoal, a largely submerged group of reefs and rocks off Luzon, the Philippines took the case to The Hague-based Permanent Court of Arbitration. On July 12, the court handed down a decision endorsing the Philippine position and rejecting Chinese claims in whole and part. In short, it dismissed Beijing’s claims of historical ownership and rejected the contention that creating artificial islands with military facilities gave any legitimacy to Beijing’s claims.

Beijing is not amused. It had rejected the court’s legitimacy in advance and categorically rejects the court’s decision. The Chinese regime’s emphasis on restoring national pride in areas where previous weakness was exploited by the West makes adherence to the court’s judgment de facto impossible.

It is important for Western observers, trained in arbitration, negotiation, accommodation, and compromise, to appreciate the unyielding nature of Beijing’s stance. Chinese school children are taught that the disputed area is theirs by right, seized during a period of Chinese weakness. Its recovery is an existential objective. Even Taiwan (Republic of China) rejects the court’s decision, making essentially the same historical argument that the area is Chinese territory.

Moreover, it is highly likely that Beijing regards the court, created over a century ago when Chinese concerns were little regarded, as a shill/stooge for Western interests. Indeed, Beijing may see Washington as supporting Japanese hegemony in other Pacific areas, making compromise even more problematic.

One can hope a modus vivendi to calm tensions is in train.

In some respects, the South China Sea imbroglio has its parallel in Tibet. Despite Western contentions since the 1950s that Tibet should be independent, it is not—and will not be. Again, Chinese children have been taught for generations that Tibet is part of China. Period.

Thus, although the court’s decision is legally binding, it has no enforcement mechanism. Its absence of a navy makes any change in the status quo (to the benefit of other claimants) no more than hypothetical.

Immediately following the court decision, Beijing hinted it could establish an Air Defense Identification Zone (ADIZ), requiring all foreign aircraft to identify themselves to Beijing. A senior Air Force officer said the United States would ignore such a zone.

Now the U.S. Navy has deployed a second carrier battle group to the region. And the U.S. chief of naval operations was scheduled to meet senior Chinese naval officers during a visit starting July 18. One can hope a modus vivendi to calm tensions is in train.

There are, however, many nationalisms in play. The Philippines, Taiwan, Vietnam, and Malaysia have equities associated with the area’s rich fishing grounds and potential undersea resources. Any of these states may feel justified in aggressive action, given the court’s rejection of Chinese claims. And while the new Philippine president’s (Rodrigo Duterte’s) promise that he would ride a water scooter to Scarborough Shoal and erect a Philippine flag is probably bombast, the multiple actors offer multiple opportunities for bloody miscalculation.