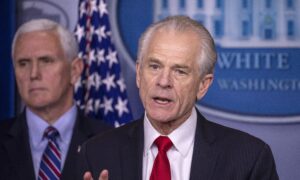 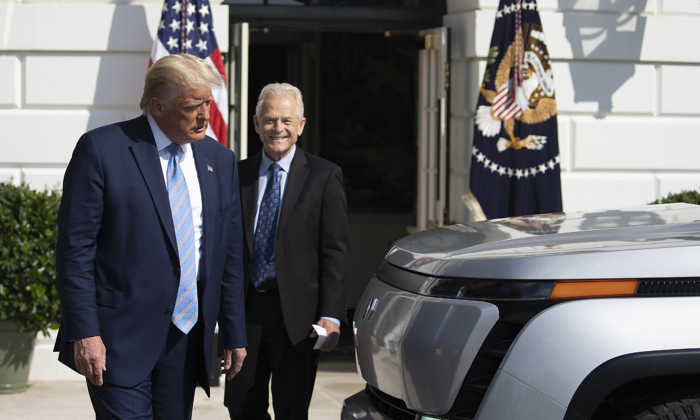 The Department of Justice (DOJ) put up hurdles to executive orders prepared by President Donald Trump while fast-tracking the ones prepared by President-elect Joe Biden during the transition period leading up to Inauguration Day on Jan. 20, according to former Trump senior adviser Peter Navarro.

“Bill Barr, President Trump’s attorney general, actually turns out to be Joe Biden’s first attorney general,” Navarro told Fox News’ Maria Bartiromo in an interview aired on Feb. 7. “We had over 30 executive orders queued after Election Day, ready to go, but we kept running into all these roadblocks and hurdles. It turns out that Bill Barr’s Office of Legal Counsel was fast-tracking all of these Biden EOs [executive orders], and basically, it was a deep-state coup.”

Navarro made the remarks when asked to explain how Biden managed to have dozens of executive actions ready to go during his first days in office. Navarro said he’s worked on preparing more than 50 executive orders during his four years at the White House. The DOJ’s Office of Legal Counsel serves as the final checkbox in the process of determining whether the president has the statutory authority to set in motion what the contents of a given order call for.

“We got slow-walked at the Department of Justice, and this is a problem I told Barr about numerous times, and he should have been fired months before he was. By the last year of this administration, he was really working against this administration in a lot of ways,” Navarro said. “The bottleneck was at the Department of Justice on so many things we did.”

In a phonecall with The Epoch Times, Barr said Navarro’s remarks were “preposterous.”

Barr announced his resignation as attorney general on Dec. 14, 2020, and departed the office on Dec. 23. At the time, Trump’s legal team was pursuing numerous challenges to the outcome of the 2020 election. In the letter, Barr lauded Trump’s accomplishments and noted that the DOJ would continue to pursue investigations into alleged voter fraud.

On Jan. 7, the day after the breach of the U.S. Capitol, Barr issued a scathing statement criticizing the president.

“Orchestrating a mob to pressure Congress is inexcusable,” Barr said in a statement obtained by Politico. “The President’s conduct yesterday was a betrayal of his office and supporters.”

Trump is now facing an impeachment trial on a charge of inciting an insurrection, in connection with a speech he delivered on Jan. 6. During his remarks, Trump told supporters to make their voices heard “peacefully and patriotically,” but many in the media and Democrats selected excerpts from the speech and used them to accuse the president of calling for violence.