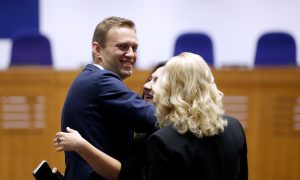 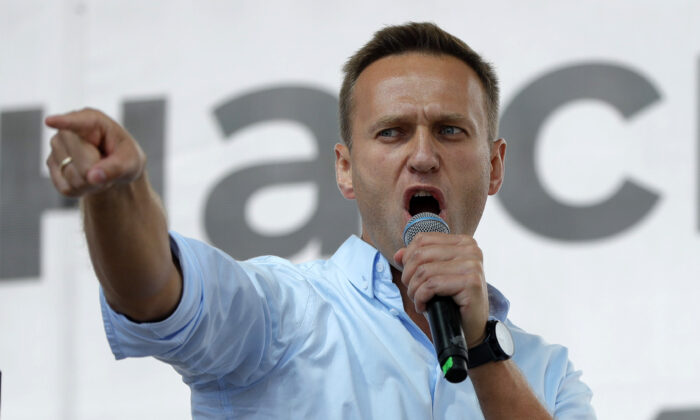 Russian opposition activist Alexei Navalny gestures while speaking to a crowd during a political protest in Moscow,  on July 20, 2019. (Pavel Golovkin/AP Photo)
Europe

Navalny’s Medevac from Russia to Germany in Limbo

MOSCOW — Family and allies of Russian opposition leader Alexei Navalny, who remains in a coma in a Siberian hospital, were fighting for his transfer to a German clinic on Friday as local doctors insisted the politician is too unstable to be medevaced and refuse to give authorization for the transfer.

Navalny, a 44-year-old politician who is one of President Vladimir Putin’s fiercest critics, was admitted to an intensive care unit in a coma at a hospital in the Siberian city of Omsk on Thursday, following what his supporters are calling a suspected poisoning that they believe was engineered by the Kremlin.

A plane with German specialists and all the necessary equipment landed at Omsk airport on Friday morning, prepared to take Navalny to a clinic in Berlin. But doctors treating the politician said his condition was too unstable to transport him and bristled at the idea of consulting with German specialists, saying that doctors that flew in from Moscow over night were competent enough.

“Poisoning as a diagnosis remains on the back burner, but we don’t believe that the patient suffered from poisoning,” Kalinichenko told reporters on Friday.

Kalinichenko added that a diagnosis have been determined and relayed to Navalny’s family members. He refused to reveal it to reporters, citing a law preventing medical workers from disclosing confidential patient information.

Navalny’s spokesman, Kira Yarmysh, wrote on Twitter that the politician’s family wasn’t given a diagnosis, but rather “a range of symptoms that can be interpreted differently.”

“Doctors still can’t determine the cause of Alexei’s condition,” she said.

Navalny fell ill on a flight back to Moscow from the Siberian city of Tomsk on Thursday and was taken to the hospital after the plane made an emergency landing in Omsk. His team made arrangements to transfer him to Charité, a clinic in Berlin that has a history of treating famous foreign leaders or dissidents and insisted that the transfer is paramount to saving the politician’s life.

“The ban on transferring Navalny is needed to stall and wait until the poison in his body can no longer be traced. Yet every hour of stalling creates a threat to his life,” Yarmysh said in a tweet.

German officials have been in contact with both Russians and a private group that sent a plane to pick Navalny up, and support the initiative. “If Mr. Navalny wants to get treated in Berlin and if he is able to come to Berlin, the Charité hospital is obviously ready,” Berlin Mayor Michael Mueller told the German news agency dpa.

Like many other opposition politicians in Russia, Navalny has been frequently detained by law enforcement and harassed by pro-Kremlin groups. In 2017, he was attacked by several men who threw antiseptic in his face, damaging an eye.

Last year, Navalny was rushed to a hospital from prison, where he was serving a sentence following an administrative arrest, with what his team said was suspected poisoning. Doctors said he had a severe allergic attack and discharged him back to prison the following day.

Navalny’s Foundation for Fighting Corruption has been exposing graft among government officials, including some at the highest level. Last month, he had to shut the foundation after a financially devastating lawsuit from Yevgeny Prigozhin, a businessman with close ties to the Kremlin.

The most prominent member of Russia’s opposition, Navalny campaigned to challenge Putin in the 2018 presidential election, but was barred from running.

He set up campaign offices across Russia and has been promoting opposition candidates in regional elections, challenging members of Russia’s ruling party, United Russia. One of his associates in Khabarovsk, a city in Russia’s Far East that has been engulfed in mass protests against the arrest of the region’s governor, was detained last week after calling for a strike at a rally.