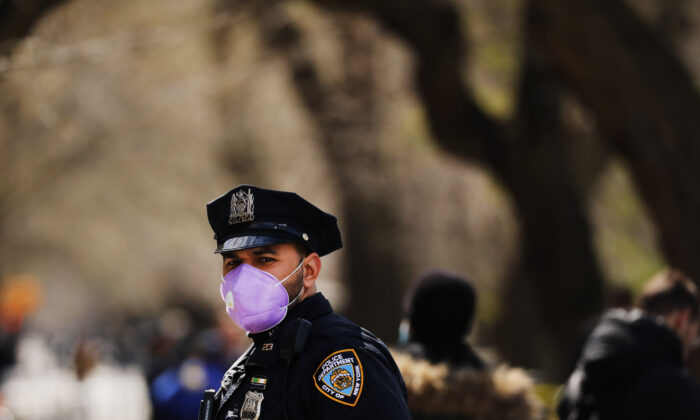 A police officer stands outside of Mount Sinai Hospital amid the CCP virus pandemic in New York City on April 1, 2020. (Spencer Platt/Getty Images)
US News

A September 2019 war game by the U.S. Naval War College produced 16 findings that shed important light on how President Donald Trump’s administration and other officials are responding to the CCP virus crisis.

Called “Urban Outbreak 2019,” the war game convened 50 experts, each with at least 10 years of humanitarian response experience, for two days to respond to a lethal disease outbreak in a city of 21 million people, according to a summary published April 1 by the institution, which is based in Newport, Rhode Island.

“While these findings are in no way definitive or complete, they are a sampling of relevant guidance based on research, gaming, and expert opinion. It is our hope that these 16 findings will contribute to improving civilian and military effectiveness in humanitarian assistance and disaster response operations,” the college said in the summary.

The summary’s first finding focused on the importance of authorities taking action as early as possible in a pandemic scenario.

“Early actions and planning are exponentially more important than reactive measures once the disease is widespread,” the summary said. “Clarity, speed, and repetition are essential for changes within a population and are most effectively achieved before other factors start making decisions for them.”

Trump’s most controversial action regarding the CCP virus was his Jan. 31 order barring travel into the U.S. by persons who were recently in China. The CCP virus originated in Wuhan, China, a metropolis with a population of 11 million residents.

When Trump announced the travel ban, there were only about 100 confirmed cases of the virus in 21 countries outside of China, including seven in the United States. Some 8.5 million people traveled between the U.S. and China in 2018, according to The New York Times, citing U.S. government data.

Democratic leaders, notably including former Vice President Joe Biden, who is currently favored to be the party’s 2020 presidential nominee, condemned Trump’s travel ban for weeks after it was announced.

“Neither should we panic or fall back on xenophobia,” Biden said in a widely publicized March 12 speech. “Labeling COVID-19 a ‘foreign virus’ does not displace accountability for the misjudgments that have been taken thus far by the Trump administration. Let me be crystal clear: The coronavirus does not have a political affiliation.”

Another of the college war game’s findings focused on the importance of mobilizing private sector companies to play leading roles in the national response to a pandemic.

“Private sector organizations are an absolutely essential and uniquely nimble component of any large-scale response,” the war game summary states, citing as an example the “tangible and innovative approaches” of the owner of an unnamed logistics company involved in getting needed supplies delivered quickly.

“He had no interest in using overland shipping options due to security concerns and poor road infrastructure, and instead sought to ferry all goods on waterways by employing a public/private partnership with the local transit authority. With this strategy, he was able to divide up most of the population centers and reach them without military support, air assets, or many changes to his existing business model,” the summary said.

Trump has made encouraging private manufacturing companies to convert to making needed supplies such as ventilators and protective face masks central to his administration’s response to the CCP virus.

As with his January travel ban, however, Trump has been severely criticized for some aspects of his effort. He was blasted earlier this week, for example, for highlighting the work of MyPillow founder and Chief Executive Officer Mike Lindell.

After Trump allowed Lindell to speak during a White House press briefing, announcing that his company will make up to 50,000 face masks daily, CNN’s Jim Acosta called it a “PR stunt.”

Another finding from the war game could give New York Mayor Bill de Blasio and officials in other cities second thoughts about releasing inmates from jail to prevent the virus from spreading.

“Some changes may be characterized as normal coping mechanisms, but flagrant criminal activity must be actively pursued to reinforce social norms. The black market will inevitably become a critical factor as market pressures increase risk, reward, and opportunity,” the summary says.

“Crime will also increase given the same factors, but including economic desperation and an opportunistic ‘testing’ of authorities’ control. Drug use, alcoholism, and domestic abuse will noticeably increase. Every action by authorities may have magnified implications for individuals, families, and communities.”