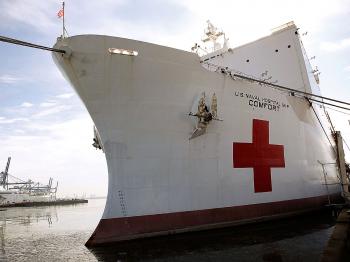 By Genevieve Belmaker
Print
The Navy hospital ship USNS Comfort arrived in Haiti on Wednesday and immediately started taking patients. According to the Navy, the first group of casualties that the ship took was from the USS Carl Vinson, an aircraft carrier with a full surgical suite.

The ship, which primarily serves as a mobile floating hospital for the U.S. military, is also equipped to provide full hospital service for other government agencies in relief and humanitarian operations.

Accommodations on the hospital ship are very tight, as more than 1,100 medical specialists and support personnel were also aboard.

A major aftershock that hit on the same day, measured at about 6.0 on the Richter scale, struck just as the ship was approaching the shore near the capital of Port-au-Prince. The quake destroyed a pier there that was intended as an evacuation point for injured Haitians.

The Comfort set off from Baltimore Harbor, MD, on Jan. 16. It is normally kept in a “cold” condition with a caretaker crew, with the water turned off around the ship, the galley closed, and with wards stashed and equipment stockpiled off the vessel. It took the ship four days to load and be ready to depart for Haiti.

According to the Naval News Service, sailors from around the U.S. were contacted to man the ship, as well as civilian mariners—many of them with only one day’s notice.