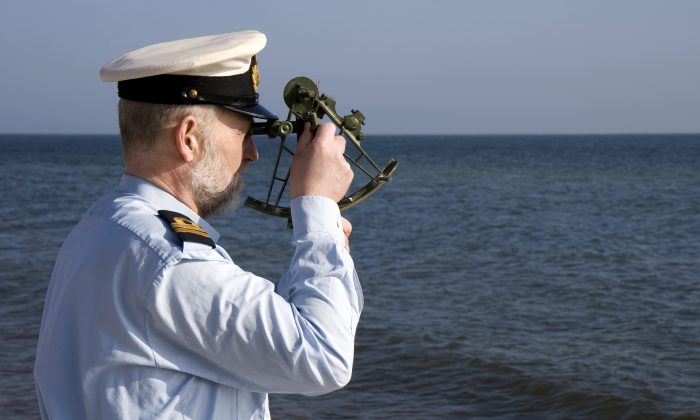 The Naval Academy will reinstate celestial navigation. (Arnphoto/iStock)
US

ANNAPOLIS, Md.—The same techniques guided ancient Polynesians in the open Pacific and led Sir Ernest Shackleton to remote Antarctica, then oriented astronauts when the Apollo 12 was disabled by lightning, the techniques of celestial navigation.

A glimmer of the old lore has returned to the Naval Academy.

Officials reinstated brief lessons in celestial navigation this year, nearly two decades after the full class was determined outdated and cut from the curriculum.

That decision, in the late 1990s, made national news and caused a stir among the old guard of navigators.

Maritime nostalgia, however, isn’t behind the return.

Rather, it’s the escalating threat of cyber attacks that has led the Navy to dust off its tools to measure the angles of stars.

After all, you can’t hack a sextant.

“We went away from celestial navigation because computers are great,” said Lt. Cmdr. Ryan Rogers, the deputy chairman of the academy’s Department of Seamanship and Navigation. “The problem is,” he added, “there’s no backup.”

Among the fleet, the Navy ended all training in celestial navigation in 2006, said Lt. Cmdr. Kate Meadows, a Navy spokeswoman. Then officers’ training returned in 2011 for ship navigators, she said. And officials are now rebuilding the program for enlisted ranks; it’s expected to begin next fall.

“There’s about 10 years when the Navy didn’t teach to celestial,” said Rogers, the Naval Academy instructor. “New lieutenants, they don’t have that instruction.”

The Navy also began pilot programs this fall in celestial navigation for ROTC students at colleges in Philadelphia, Rochester and Auburn.

In Annapolis, midshipmen studied celestial navigation more than a century, until 1998. So what happened?

In the 1990s, airmen launched two dozen satellites nearly 13,000 miles above Earth. By 1995, this network, the Global Positioning System, could pinpoint your location within feet.

Since then, GPS has never been shut off, according to the government’s website gps.gov.

Today, 31 satellites circle the Earth, each twice a day, costing taxpayers about $1 billion a year.

“The perceived need for sextants was taken away,” said Peter Trogdon, president of Weems & Plath in Eastport.

The company has sold sextants, and other nautical instruments, since it was founded in 1928 by Naval Academy navigation instructor Capt. Phillip Van Horn Weems. He taught Charles Lindbergh navigation during the pioneer days of aviation.

“There’s only a few thousand sold a year,” he said. A lightning strike to a ships’ mast could disable GPS receivers. “Most of those are sold to yachtsmen that want to have a backup.”

Still, GPS has transformed humanitarian and rescue efforts around the world.

Using GPS “you’re within feet. You’re not even in the same ballpark. If you can use GPS, it’s just so much more accurate,” Rogers said, adding, “we know there are cyber vulnerabilities.”

He didn’t once need a sextant.

Still, a world without GPS isn’t too remote a possibility for retired Navy Capt. Terry Carraway, of Silver Spring.

He formed the nonprofit Navigation Foundation in the early 1980s to sustain proficiencies in celestial navigation. That organization peaked with more than 500 navigators, he said.

“In the event that we had to go into a national emergency, we would probably have to shut the GPS down because it can be used by potential enemies,” he said. “It would be pretty hard to train a lot of people in celestial navigation, so we wanted to keep contact with all the people who taught it.”

The foundation disbanded in 2002.

“The old celestial navigators all passed away,” said Carraway, 88.

Cadets at the U.S. Coast Guard Academy in New London, Connecticut, used to have a course devoted entirely to celestial navigation. It ended about 10 years ago, said David Santos, the academy spokesman.

Some classroom instruction remains in theories of celestial navigation, Santos said. Also, cadets use a sextant aboard the tall ship Eagle.

Benson provided a statement from Tisch:

“Knowledge of celestial navigation in the GPS era provides a solid back-up form of navigation in the event GPS becomes unreliable for whatever reason,” Tisch said in the statement. “It is also good professional practice to use one navigational system to verify the accuracy of another.”

The Capital reported in June 1998:

“First came the old salts, who fear the military school will no longer produce ‘real’ sailors. Knowing how to navigate by the stars, they say, is the mark of a mariner. Then came the profit-seekers, who asked if they could inherit the academy’s $1,500 sextants. Such devices, inquirers said, would be a nice addition to their museum, a nice mantle piece, or of some use out on the yacht.” (The academy still has its sextants, Rogers said.)

The decision to cut the academy’s long-standing class on celestial navigation was even raised in a New York Times editorial calling the move “a melancholy surprise.”

Still, that decision came after months of discussion that began with a 1996 curriculum review. That review came partly in response to a cheating scandal in the early 1990s that ended with 24 midshipmen expelled.

The review committee decided the required sophomore course on navigating by stars was outdated. Then-Superintendent Adm. Charles Larson, after consulting with commanders of Navy ships, cut the course and added extra lessons on computer navigation.

Midshipmen were relieved. Celestial calculations were painfully difficult, requiring a nautical almanac and volumes of tables. Still, the news caused more than a dozen letters to the editor in Proceedings, the magazine devoted to naval service.

“It fired people up,” Fred Rainbow, the magazine’s editor then, told The Capital.

Five years later, the Navy reinstated the subject in the manual issued two months ago.

The first midshipmen to receive training were juniors during this past summer school. Future classes will learn theories of celestial navigation during an advanced navigation course. And the Class of 2017 will be the first to graduate with the reinstated instruction.

But it’s only three hours of celestial navigation—so students won’t be skilled with sextants.

“This is the first semester we added it in, so we’re just baby-stepping it,” said Lt. Christine Hirsch, who teaches navigation at the academy. “We just added the theory, but we really do have the capabilities to expand.”

“Fantastic,” said Trogdon, the president of Weems & Plath. “How cool is it to go back to the ancestral technique?”

Rogers at the Naval Academy said, “That’s a victory. I agree with them. I think, if you’re out at sea, you should be able to navigate without GPS—things happen.”

In the 1990s, midshipmen were tested on the sextant. They took celestial measurements, then entered data, sometimes 20 figures, for each star, time, distance, angle.

This year, Midshipman Phillip Lowry, of North Ogden City, Utah, learned the general theory of celestial navigation. He considered those past mids.