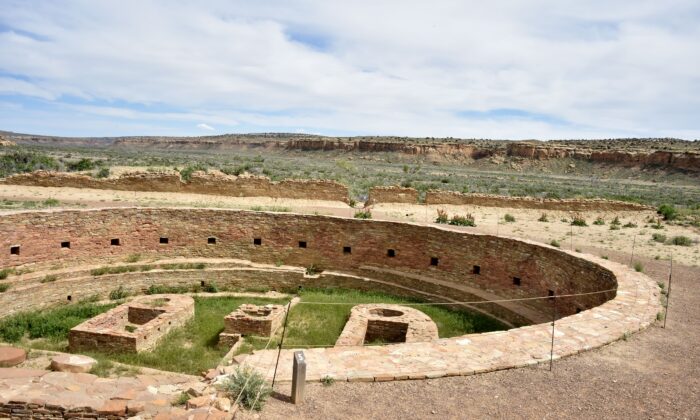 The ruins of ancient Pueblo structures are seen at Chaco Culture National Historical Park on May, 20, 2015. (Mladen Antonov/AFP via Getty Images)
Executive Branch

The Biden administration conveyed on Nov. 15 its intention to pause new oil and gas drilling for 20 years within a 10-mile radius of the Chaco Canyon National Historical Park in New Mexico, which already prohibits oil and gas drilling within its borders. The move has drawn objections from the 24th Navajo Nation Council, which represents allottees of oil and gas leasing within the perimeter and favors a five-mile protective radius instead.

The administration’s announcement comes after Congress approved a one-year ban on oil and gas leasing within a 10-mile perimeter of the park as part of the 2021 spending legislation approved in December 2020.

According to a statement from the Department of the Interior (DOI), the proposed move “would not affect existing valid leases or rights and would not apply to minerals owned by private, State, or Tribal entities.”

Yet, Navajo Nation Resources and Development Committee Chair Rickie Nez, representing the Navajo communities of T’iistsoh Sikaad, Nenahnezad, Upper Fruitland, Tsé Daa K’aan, Newcomb, and San Juan, has expressed concern about the pause’s effect on Navajo allotment owners who may wish to open their land to oil and gas development.

“We must ensure the livelihood of Navajo allotted landowners in the greater Chaco Canyon area are maintained. The Navajo Nation through a resolution has provided a compromise to also protect this sacred area from mineral development. The Biden Administration has to work with us to find a solution that meets our needs and that is this five-mile buffer zone,” Nez said in a statement from the Navajo Council.

“Tribal nations do better when they make their own decisions,” Biden said, before mentioning the proposal for the 10-mile buffer zone as part of his remarks to the White House Tribal Nations Summit.

In the Interior Department’s statement, Assistant Secretary for Indian Affairs Bryan Newland said the proposal was “a great example of how Tribally-led conservation can advance the nation’s goal of addressing climate change.”

However, Navajo Council Speaker Seth Damon, representing the communities of Bááhaalí, Chichiltah, Manuelito, Red Rock, Rock Springs, and Tséyatoh, had a different perspective on the issue.

“The Biden Administration bypassed previous requests to Congress for field hearings and for leaders to hear directly from our Navajo families affected in the Chaco Canyon region,” Damon said as part of the Navajo Council statement. “It is important that the federal government consider and work with our Navajo allottees to further advance development. The Administration must respect our tribal sovereignty and what the government-to-government relationship entails.”

“The Interior Department unilaterally made this withdrawal proposal without proper tribal consultation, now directly affecting our families on the Navajo Nation,” Freeland said in the statement.

By contrast, the All Pueblo Council of Governors (APCG), which includes the leaders of 20 Pueblo nations in New Mexico and Texas, has voiced its strong support for the Biden administration’s move, which it argued would protect vital artifacts and heritage of the ancient Pueblo and other tribes.

“On behalf of the 20 Pueblo Governors, we are overjoyed by the actions of President Biden and grateful to Secretary [Deb] Haaland for honoring the responsibility of each Pueblo Leader to protect Pueblo culture. Today’s announcement is the result of continuous prayers and the commitment to steward mother earth, our Sacred Trust,” said Wilfred Herrera Jr., chairman of the APCG and former governor of the Laguna Pueblo nation, as part of an APCG statement.

A spokesperson for the APCG said it didn’t have sufficient time to answer more detailed questions from The Epoch Times about the move, including the Navajo Nation’s concerns regarding it.

Rep. Paul Gosar (R-Ariz.) and other Republican congressmen also objected to the move.

“Today’s latest land grab by the Biden administration will strip hundreds of Navajo Allottees of their rights to their lands by imposing an unscientific and overreaching buffer around Chaco Canyon,” Gosar said. “We heard from these allottees directly and urged the DOI to listen and reject this reckless policy. This action is another attack on America’s energy independence by the Biden administration. They are determined to shut down federal lands to all energy development while begging foreign countries for more oil. Americans reject this America Last policy.

The disagreement over lands near Chaco Canyon is one skirmish among many in the long-running conflict between Democrats and Republicans over the future of fossil fuels.

In April 2020, as COVID-19 lockdowns throttled the nation’s economy, Rep. Alexandra Ocasio-Cortez (D-N.Y.) responded to a Twitter post about oil prices going negative by writing on Twitter that “You absolutely love to see it.”

At an October meeting of the House Committee on Natural Resources, Westerman, the committee’s ranking Republican, challenged Democrats on the panel to speak up if they didn’t ultimately seek to end domestic oil and gas production altogether.

No Democrats spoke up.