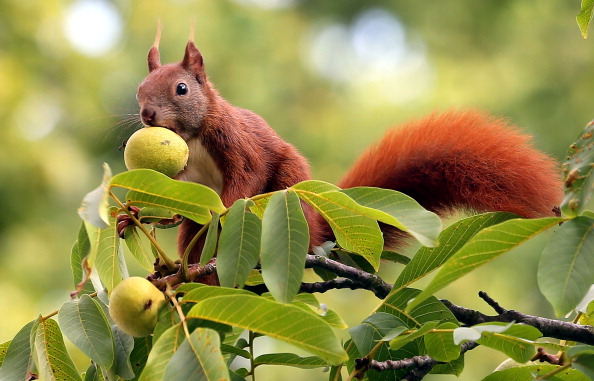 A squirrel is seen on August 14, 2014 on a walnut tree in Berlin. (Wolfgang Kumm/AFP/Getty Images)
Environment

Summer can be a very inspirational time for creative types. Nature is in full bloom, allowing artists to truly explore the world around them.

One such “artist” was the 19th century American poet Emily Dickinson. Best known for poems like “I’m Nobody! Who are You?” and “Hope Is A Thing With Feathers”, only a few of Dickinson’s poems were published while she was alive even though she was a prolific writer. Many of these poems included imagery found in nature.

Below I have included a few of  such poems by Dickinson. Maybe they’ll inspire you to create some nature inspired art of your own.

Who Robbed The Woods

Who robbed the woods,
The trusting woods?
The unsuspecting trees
Brought out their burrs and mosses
His fantasy to please.
He scanned their trinkets, curious,
He grasped, he bore away.
What will the solemn hemlock,
What will the fir-tree say?

A sepal, petal, and a thorn
Upon a common summer’s morn,
A flash of dew, a bee or two,
A breeze
A caper in the trees, –
And I’m a rose!

Drab habitation of whom?
Tabernacle or tomb,
Or dome of worm,
Or porch of gnome,
Or some elf’s catacomb?

A sloop of amber slips away
Upon an ether sea,
And wrecks in peace a purple tar,
The son of ecstasy.

All poems are under public domain and written by Emily Dickinson

This article was originally written and published by Maddie Perlman-Gabel, a contributing writer for www.enn.com. For the original story and more information, please click HERE.