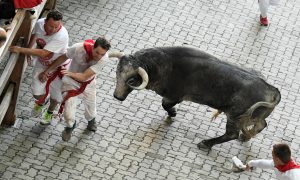 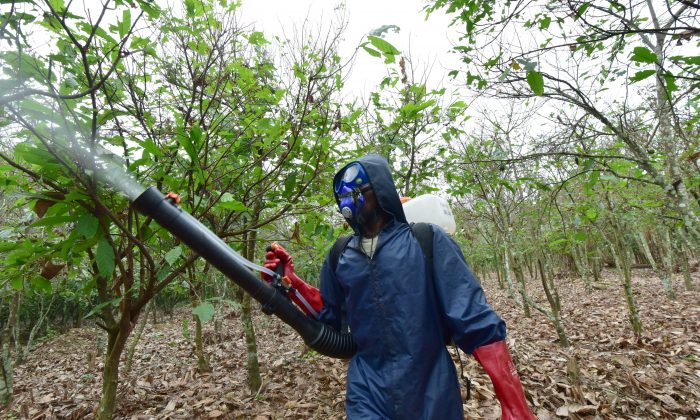 An employee sprays pesticides on a cocoa plantation in Tiassale, in the south-eastern part of Ivory Coast where caterpillars eat vegetation including cocoa treas, on July 14, 2016. ISSOUF SANOGO/AFP/Getty Images)
Viewpoints

When last we visited the complex subject of risk in America, we discussed how the issue is used by many organizations and businesses to advance their causes and increase their sales.

There are few more effective calls to action than one that convinces the listener that he or she is in danger.

As risk communication became refined over the years, a simple—if flawed—division began to appear in American discourse: the difference between the natural and the unnatural.

A large segment of the nation began to believe, with varying degrees of conviction, that the shorter the line one could draw between a product or activity and processes in which man plays no part—natural processes—the inherently safer the product or activity.

On the other hand, this segment of society presumes that risk increases in proportion to the degree with which mankind interjects itself into an activity or creation of a product.

Under this mindset, organic foods are good and wholesome, while foods that utilize man-made pesticides and herbicides are unnatural and, therefore, are more dangerous to the consumer. This conclusion is, at best, flawed and—in some cases—can be dangerous.

It isn’t correct to conclude that organic foodstuffs don’t contain chemicals and biological weapons to repel pests and weeds. Without such weapons, they wouldn’t be viable. It is rather that those defenses are “natural” and presumably preferred to whatever “unnatural” alternative mankind engineered.

But this isn’t necessarily the case. The Ames test offers one example to prove the point.

The Ames is a commonly used, widely accepted technique to identify carcinogens based on mutagenicity, which is the ability of a compound to cause mutations in cells. Dr. Bruce Ames, an early champion in the environmental movement, developed the test in the 1970s, expecting it would help expose the danger of synthetic pesticides.

He and his associate at the University of California at Berkeley, Dr. Lois Swirsky Gold, found that the opposite was very often true. The natural pesticides that “organic” produce developed were frequently more potent potential mutagens than the man-made variety.

In a paper the pair published in 2000, they also concluded:

“We have estimated that on average Americans ingest roughly 5,000 to 10,000 different natural pesticides and their breakdown products. Americans eat about 1,500 mg of natural pesticides per person per day, which is about 10,000 times more than the 0.09 mg they consume of synthetic pesticide residues.”

It should be noted that neither Ames nor Gold found the average American’s exposure to natural pesticides very troubling. They were merely trying to put the “risk” of synthetic pesticides in proper perspective.

The “natural good, unnatural bad” paradigm recently found a home in a most unusual place: the brewing industry. That’s remarkable. Of all the risks associated with consuming alcohol, such as alcoholism, drunk driving, liver damage, weight gain, etc., the last risk one would expect brewing companies to shine a light upon is the fermentation process.

Although I enjoy a good beer as much as the next fellow, in the interest of full disclosure, I confess that I am not a regular consumer of products brewed by either Budweiser or Miller, the two combatants in this advertising war. I have no skin in this game.

Beer has been around for millennia. Before the advent of modern purification and preservation practices, it played an important role in many diets. Alcoholic beverages, including beer, were a staple of life at sea during the Age of Sail. Compared to plain fresh water, beer had a much longer shelf life. As an example, the reason the Mayflower made landfall in Massachusetts wasn’t because they found Plymouth Rock especially interesting, it was because they were running out of beer.

The alcohol in beer, or any alcoholic beverage, is produced through a version of the process we call fermentation, which converts sugars to alcohol. The product you get and how it tastes depends on the raw material you start with. To get to beer, brewers start with a variety of sources of sugar, depending on the nature and taste of the product they want to create. Bud products use rice, while Miller products start with corn. That’s it. The flavor profile of each is a bit different because of those different starting points, but it’s ridiculous to imply one is better than the other, or somehow more natural because they utilize different starting points to get to the same end: conversion of sugars to alcohol.

But, Bud’s advertisers are clever enough to know that if they can tap into that fear of man overly interjecting himself in a “natural” process, they can make their chief domestic competitor look bad. It is, in my opinion, a ridiculous position.

Whether Miller started with corn kernels, or with the sugar extracted from those kernels (aka, corn syrup), the fermentation process would proceed the same way. Indeed, one could argue that by extracting only part of the corn they actually need and thus leaving the rest available to make different products, Miller should be praised for environmental stewardship.

The rice versus corn syrup argument is silly, but it doesn’t ultimately set the nation back in any meaningful way. The same can’t be said for some of the risk-motivated campaigns that big NGOs champion, as we shall see in the next installment of this series.