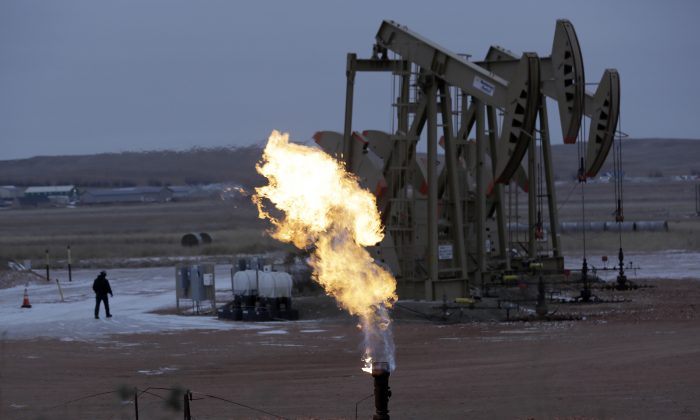 Workers tend to oil pump jacks behind a natural gas flare near Watford City, N.D., on Dec. 17, 2014. Natural gas, the nation's most prevalent heating fuel, is getting cheaper just as winter is arriving because of mild temperatures and plentiful supplies. (AP Photo/Eric Gay)
Business & Markets

Natural Gas Down 29 Percent in a Month

NEW YORK—Natural gas, the nation’s most prevalent heating fuel, is getting cheaper just as winter is arriving because of mild temperatures and plentiful supplies.

The price of natural gas has dropped 29 percent in a month, to $3.17 per 1,000 cubic feet on Tuesday from nearly $4.50 in late November. That’s a steep drop even for a fuel notorious for volatile price swings.

The lower prices are expected to linger and could reduce electricity prices and heating bills in the coming months. Natural gas is used by half of the nation’s households for heating and to generate 26 percent of the nation’s electricity.

Natural gas often rises as winter weather approaches, and a frigid November sent the price higher. But December warmed up, and temperatures for the rest of the winter are expected to be close to normal.

Bob Brackett, an analyst at Bernstein Research, wrote in a recent note to investors that he expects natural gas to average “in the low 3’s” into the spring, and a warm winter could push the price below $3.00.

Last year at this time natural gas was near $4.50 and it reached as high as $6.15 in February after unusually cold weather gripped the eastern half of the country and stuck around for weeks. Prices in some locations averaged double or triple that amount as pipelines struggled to carry all the gas that was needed.

Because of the way natural gas and electric utilities are regulated, customers won’t likely see the recent drop reflected in their bills right away. Many will instead see higher prices as a result of last year’s price spike.

But the lower market prices could at least slow the rise in retail prices and perhaps reverse it if the low prices last.

Conditions look good for low prices throughout the spring. After that, though, prices could head back up, analysts say.

One-fifth of the nation’s natural gas production is from gas found when drilling for oil, so-called “associated gas.” A drop in the price of oil is forcing drillers to cut back, and that may slow the growth in production of associated gas.

Also, in April of next year an Environmental Protection Agency rule governing emissions of mercury and other toxic chemicals goes into effect. That will force electric utilities to reduce their use of coal, the chief source of those emissions, and turn instead to natural gas.

Brackett expects natural gas prices to increase after the second quarter and average $4 per 1,000 cubic feet for the year.

Tom Pugh, an analyst at Capital Economics, thinks the gas price could reach $6 by the end of 2016 as power generation and exports boost demand.

That assumes normal weather, of course. Another strong blast of arctic air could bring higher prices much sooner.

“A resurgence in cold weather, and the resultant jump in demand, could still lead to large price spikes during January and February,” Pugh wrote in a research note Tuesday.