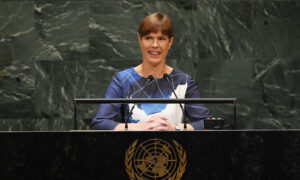 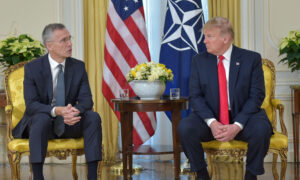 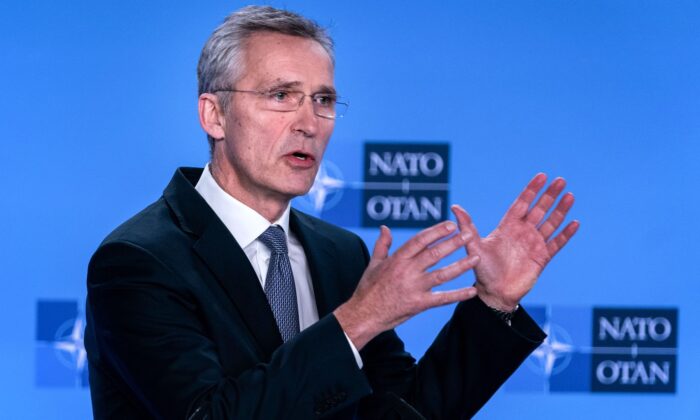 NATO Secretary General Jens Stoltenberg delivers a speech during a press conference at the end of The North Atlantic Council meeting focused on the situation concerning Iran, at NATO Headquarters, in Brussel, on Jan. 6, 2020. (Kenzo Tribouillard/AFP via Getty Images)
International

NATO Secretary-General Jens Stoltenberg said following the meeting of foreign ministers representing 30 NATO states from both sides of the Atlantic that NATO’s military readiness had not been impacted by the CCP virus pandemic and the Alliance will “speed up and step up assistance” to civilians to combat the health crisis.

The video conference meeting was held on April 2, 2020, with the main goal to assess NATO’s response to the CCP (Chinese Communist Party) virus, commonly known as novel coronavirus and ensure that its military readiness is not impacted by it, as well as to address other security challenges worldwide.

NATO has also been directly involved in the civilian efforts to combat the spread of the CCP virus. The Alliance used its existing agencies, units, and programs to assist in the civilian efforts, for example, NATO’s 24/7 disaster response center coordinated requests for help from Allies and partner countries, according to a NATO fact sheet.

NATO also setup field hospital tents in less than 24 hours, Germany transported patients from Italy and France to its hospitals for treatment, according to a NATO fact sheet.

The Ministers directed U.S. Air Force General Tod Wolters, who currently serves as NATO’s supreme allied commander Europe “to coordinate the necessary military support to combat the crisis, to speed up and step up assistance,” Stoltenberg said at a press conference after the ministerial meeting.

The NATO foreign ministers stated in the Declaration issued after the ministerial meeting that NATO has put in maximum efforts to overcome the challenge imposed by the CCP virus pandemic to “remain active, focused and ready to perform its core tasks: collective defense, crisis management, and cooperative security” for almost 1 billion people.

The Alliance has canceled or adjusted some exercises, but it does not undermine its operational readiness, said Stoltenberg.

“Our ability to conduct our operations and assure deterrence and defense against all the threats we face is unimpaired. And we have today taken further decisions to enhance NATO’s role in facing current and future security challenges, the declaration says.

“The threats and the challenges we are faced with don’t disappear because of the COVID-19 crisis, Stoltenberg said at the press conference. Terrorist activities carried out by al-Qaida and ISIS continue,” he said. Russia conducted a new exercise in western parts of its country close to NATO borders and maintains its significant presence in the North Sea.

Therefore military commanders in different regions “have implemented a wide range of precautionary measures to help reduce the spread of the virus,” to maintain military presence and readiness in Afghanistan, as well as sea patrolling and air policing at NATO’s eastern flank, Stoltenberg said.

Some NATO personnel have contracted the coronavirus, Stoltenberg said, “but the missions, the operations, the readiness of NATO continues because NATO was created to deal with crises.”

The ministers also discussed combating the disinformation on the CCP virus spread by China and Russia. Stoltenberg emphasized the role of “free and independent press” with journalists “who are asking the difficult questions, who are checking their stories, checking their sources and then conveying that to the broader public,” in countering propaganda and disinformation.

Despite years of disinformation and propaganda, an independent survey shows that public support of NATO remains strong, he added.

Poland’s Minister of Foreign Affairs Jacek Czaputowicz who represented Poland told The Epoch Times in an email after the ministerial meeting:

“We indeed see the intensification of international disinformation campaigns on the coronavirus pandemic. We hear false narratives about the alleged weakness of the West, EU or NATO.”

Czaputowicz provided examples of disinformation targeting Poland like a statement made by a Russian senator who said that Poland allegedly blocked Russian flights to Italy, or a false message spread through social media accusing Poland of blocking medical supplies intended for other countries.

“Social resistance to such attempts remains very important in counteracting disinformation. Let’s use official sources of information. Let’s not pass on unverified messages. If in doubt, let’s verify the facts at source before we accidentally become part of someone’s disinformation campaign,” Czaputowicz said.

“NATO and its Allies including Poland coordinate their efforts to counter attempts exploiting the current crisis,” he added.