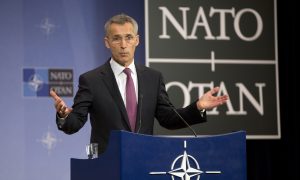 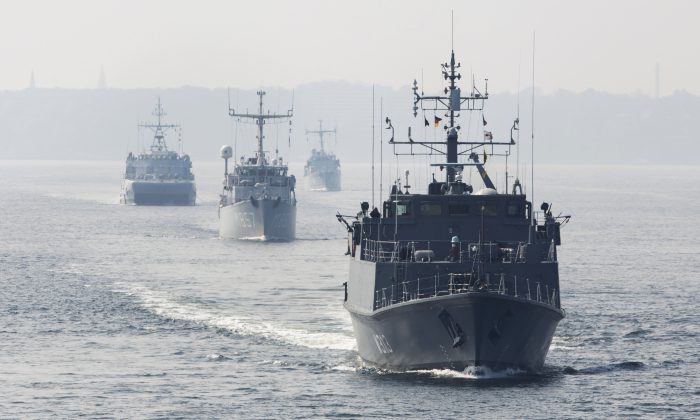 The warships of the standing NATO Mine Counter-Measures Group ONE with, from front to back, Estonian minehunter Admiral Cowen, Dutch minehunter Makkum, Norwegian minesweeper Otra, and Belgian minehunter Belis set sail from Kiel, Germany, on April 22, 2014. (AP Photo/Gero Breloer)
International

NATO Warships Ordered to Aegean to Help With Migrant Crisis

BRUSSELS—NATO’s European commander on Thursday ordered three warships to move immediately to the Aegean Sea to help end the deadly smuggling of migrants between Turkey and Greece.

“This is about helping Greece, Turkey and the European Union with stemming the flow of migrants and refugees and coping with a very demanding situation,” Stoltenberg said, calling the situation a “human tragedy.”

Earlier this week, the International Organization for Migration said 409 people have died so far this year trying to cross the sea to Europe, and that nearly 10 times as many migrants crossed in the first six weeks of 2016 as in the same period last year. Most come from Turkey to Greece and then try to head north through Europe to more prosperous countries like Germany and Sweden.

The three NATO warships will provide “important information” to the Greek and Turkish coast guards and other authorities, Stoltenberg said. According to NATO’s website, the flotilla is composed of a German navy flagship, the Bonn, and two other vessels, the Barbaros from Turkey and the Fredericton from Canada.

“This is not about stopping or pushing back refugee boats,” Stoltenberg stressed. “NATO will contribute critical information and surveillance to help counter human trafficking and criminal networks.”

NATO will also step up intelligence, surveillance and reconnaissance activities on the Turkish-Syrian border, Stoltenberg said.

U.S. Defense Secretary Ash Carter said earlier Thursday that NATO military authorities also will draw up plans for how the alliance could further act to help shut down illegal migration and smuggling of people across the Aegean Sea.

NATO was responding to a request by Turkey, Germany and Greece for alliance participation in an international effort targeting the smugglers.

The International Organization for Migration said 76,000 people—nearly 2,000 per day—have reached Europe by sea since Jan. 1.

Lebanon and Jordan at ‘Tipping Point’ Because of Syrian Crisis, Says Dion

“There is now a criminal syndicate which is exploiting these poor people,” Carter said. “Targeting that is the greatest way an effect could be had.”

During a visit to The Hague on Wednesday, Turkish Prime Minister Ahmet Davutoglu said he and his Dutch counterpart, Mark Rutte, agreed to work together with NATO and Frontex, the European Union’s border agency, “against the human traffickers who exploit the Syrian refugees and pave the way for their deaths at sea.”