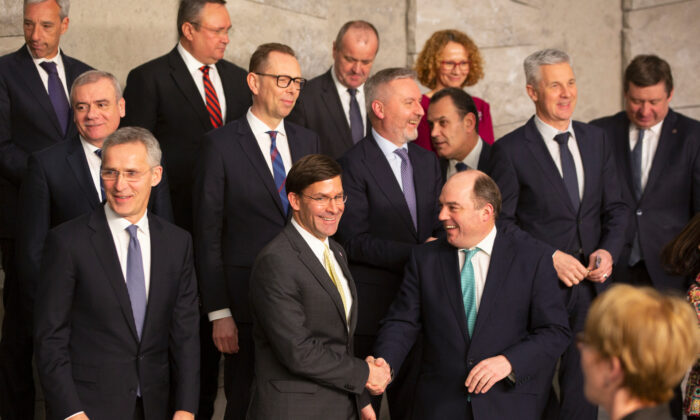 NATO is ready to expand its military training effort in Iraq, Secretary-General Jens Stoltenberg said, but the Iraqi government has not yet approved the move.

The NATO plan now is to move hundreds of trainers working with the Global Coalition to Defeat ISIS in Iraq to NATO’s mission of helping to build up the Iraqi army to the point that it will be able to maintain stability and security in the country on its own. No additional NATO personnel would be deployed to the strife-torn country.

The participants of the NATO Defense Ministers meeting held on Feb. 12 in Brussels agreed that this plan is only the first step in supporting Iraq, and that lawmakers will explore further what else NATO can do. The goal is to defeat ISIS and ensure that it will not return.

“In the first instance, this will consist of taking on some of the Global Coalition’s current training activities. Ministers also agreed to explore what more we can do,” Stoltenberg said at a press conference.

Stoltenberg said that the training activities in Iraq will be resumed as soon as possible. NATO has not yet provided details on the number of troops or types of training activities that will be shifted over from the Global Coalition’s training force, which numbers about 500. He added that these details would be discussed with the Global Coalition in Munich, Germany, on Friday.

The question remains whether countries will increase their military contribution and move their activities from the Global Coalition to the NATO mission in Iraq. “Several Allies, or all Allies, actually, supported the decision to do more and also to take over some of the activities which is today conducted by the U.S.-led Global Coalition to Defeat ISIS,” Stoltenberg said.

The Defense Department’s expectation is to increase NATO’s presence in Iraq to reduce the number of American troops there, Defense Secretary Mark Esper said.

“To the degree that NATO can offset the U.S. presence, that would over time allow us to bring some forces home, which you all should know has been my ambition for some time,” Esper told reporters en route to NATO’s defense ministers conference, according to the Department of Defense.

A reduction of U.S. forces in Iraq would allow the United States to right-size forces in other theaters, the Indo-Pacific area in particular, in accord with the National Defense Strategy, he added.