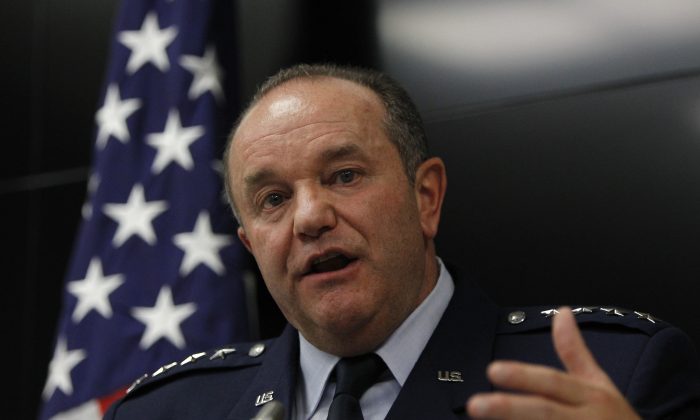 KIEV, Ukraine—Russia still has enough troops along Ukraine’s border to mount a major incursion, NATO’s top commander said Wednesday, and Moscow is using its military might to affect political developments inside Ukraine.

Moscow has routinely denied it played any direct role in the conflict in Ukraine, which has claimed more than 4,000 lives.

Breedlove spoke during a brief visit to Kiev, where he met with top officials to discuss continued NATO assistance for Ukraine in its fight against Russian-backed separatists in the east.

“We are going to help Ukraine’s military to increase its capacities and capabilities through interaction with U.S. and European command,” he said, adding that it “will make them ever more interoperable with our forces.”

Ukraine has received multiple pledges of military support from Western nations, but has been frustrated by Washington’s reluctance to promise any lethal equipment. But a senior aide to President Barack Obama said last week that he believes the U.S. should consider giving lethal defensive equipment to Ukraine.

The Ukrainian armed advance against rebel forces ground to a halt and was substantially reversed over the summer as government troops found themselves faced by a well-equipped and determined foe.

“This international border is completely wide open and maintained open by Russian forces, so that forces, supplies, money, fighters can move across at will,” Breedlove said.

A truce was agreed in early September but fighting continues daily in several areas of eastern Ukraine.