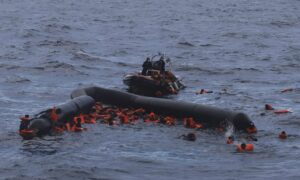 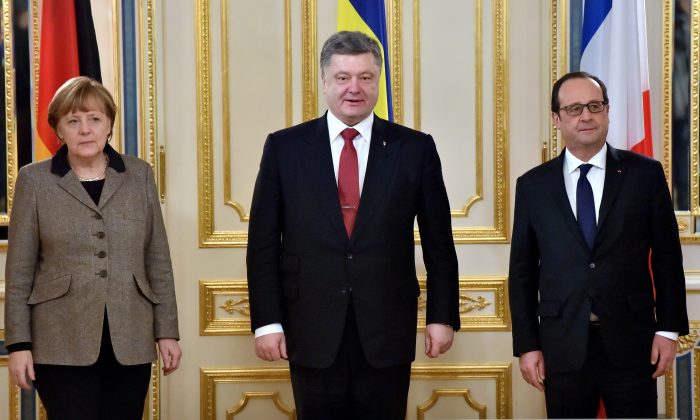 MUNICH (AP) — Ukraine’s president pushed for both a quick cease-fire in his country’s troubled east and defensive weapons from the West, as mediators sought momentum Saturday for a deal to stem the fighting at Europe’s edge.

Petro Poroshenko and Russian President Vladimir Putin are to confer with the leaders of Germany and France by phone Sunday in an effort to overcome months of setbacks and suspicion and breathe new life into a much-violated September peace plan. But even those who had scheduled the call were cautious about its prospects.

German Chancellor Angela Merkel — who along with French President Francois Hollande traveled to Kiev on Thursday and Moscow on Friday — acknowledged disillusionment over the failure of previous agreements to stick and said “there are no theoretical guarantees” that a new one would either.

Western anxiety over the conflict is growing and sanctions are taking a toll on Russia’s economy. More than 5,300 people have been killed since fighting began in April, according to a U.N. tally, and the bloodshed has markedly increased over the past two weeks.

“I do not believe there will be a final solution on this situation. Putin is still not weak enough to accept that, and the West is not strong enough to insist on its terms,” said Igor Sutyagin, an analyst with the Royal United Services Institute in Britain.

The resurgent fighting has prompted the U.S. to consider giving lethal weapons to Ukraine, an option opposed by European nations which fear the move would merely exacerbate the situation.

“I cannot imagine any situation in which improved equipment for the Ukrainian army leads to President Putin being so impressed that he believes he will lose militarily,” Merkel said at the Munich Security Conference. “I have to put it that bluntly.”

U.S. Vice President Joe Biden, who also attended the Munich conference, stopped short of explicitly addressing possible arms deliveries. “We will continue to provide Ukraine with security assistance not to encourage war, but to allow Ukraine to defend itself,” he said.

Russia’s most immediate goal is likely the lifting of some of the Western sanctions which, in concert with plunging oil prices, have driven the Russian economy into a parlous state — or at least to fend off the imposition of further sanctions. In the longer game, Russia has pushed for so-called “federalization” ofUkraine that would give broad powers to its provinces and allow them to deal directly with Moscow.

Russia also wants to keep Ukraine out of NATO. Although Ukraine dropped its nonalignment policy last year, the Western alliance would be unlikely to accept Ukraine anytime soon because of its unstable politics and endemic corruption.

France’s president said a new peace deal could feature a broad demilitarized zone and greater autonomy forUkraine’s separatist eastern region. “These people have gone to war,” Francois Hollande said. “It will be difficult to make them share a common life.”

The aim is to draw up a possible joint document on implementing the September peace plan concluded in Minsk, Belarus. That widely disregarded agreement also featured a demilitarized zone, though the battle lines have since changed, and the government in Kiev has offered a measure of autonomy to the separatists.

While Germany and France are facilitating talks, “the important decisions must be made in Moscow and Kiev,” German Foreign Minister Frank-Walter Steinmeier said.

Poroshenko told the Munich conference that Ukraine stands ready for a “comprehensive and immediate cease-fire” and Russia should be too.

He indicated he wanted no peacekeepers in eastern Ukraine, saying they wouldn’t be needed if foreign fighters withdrew and the Ukraine-Russia border was sealed. Then, he said, there would be “peace and stability in Ukraine … within a couple of weeks.”

“There is no temporary solution — this conflict must be resolved, not frozen,” he said, alluding to long-time conflicts involving breakaway regions in Georgia and Moldova.

Later, Poroshenko suggested the Ukrainian side could be flexible on certain issues. He said he was open to discussing the size and contours of a proposed buffer zone separating the combatants, and was prepared to put the question of federalization to a referendum.

Merkel said it is uncertain whether the talks will succeed, “but it is, from my point of view and that of the French president, in any case worth making this attempt.”

Biden agreed that an attempt was worthwhile but said Russia must be judged by its actions, “not by the paper they signed.”

As soon as Kiev and eastern Ukrainian separatists agree on practical details of implementing the Minsk deal, “I am sure that Russia will be among those parties that will guarantee the implementation of this agreement,” Lavrov told the conference. “But you can only guarantee what has already been achieved.”

The United States and other Western countries contend Russia has supplied troops and equipment to the separatists in eastern Ukraine who have been fighting Ukrainian government forces since April. Russia denies the claims.

Lavrov also denounced “growing appeals in the West to … pump Ukraine full with lethal weapons and to involve it in NATO.” He said that “this position will only exacerbate the tragedy of Ukraine.”

Poroshenko said talk of lethal weapons had been overdone and pointed to interest in equipment such as radar and jamming stations.

Ukraine has “proven to be responsible, that we will not use the defensive equipment to the attack,” he said. “The stronger our defense, the more convincing is our diplomatic voice.”

Meanwhile, fighting continued in eastern Ukraine. Five Ukrainian servicemen were killed and 26 wounded in fighting over the past day, Ukrainian security council spokesman Volodymyr Polyoviy said Saturday. The government website in the port city of Mariupol said one man was killed in shelling of the outlying settlement of Gnutove, which it blamed on rebels.