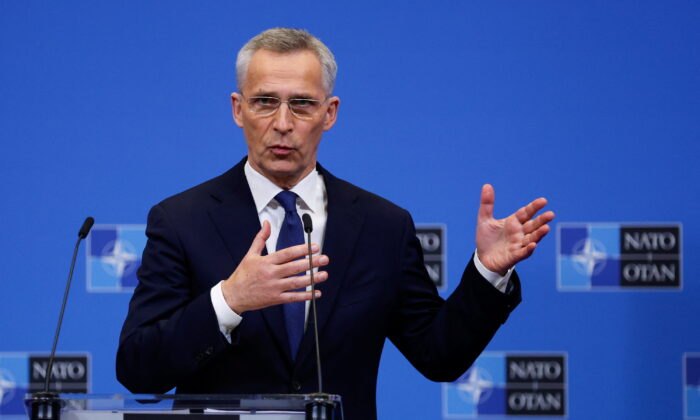 NATO Plans ‘Reset’ to Deal With ‘Long-Term Consequences’ Regarding Russia

NATO Secretary-General Jens Stoltenberg suggested that the military alliance may establish a permanent presence of troops on its eastern flank in response to Russia’s invasion of Ukraine.

“What we see now is a new reality, a new normal for European security. Therefore, we have now asked our military commanders to provide options for what we call a reset, a more longer-term adaptation of NATO,” Stoltenberg told The Telegraph this weekend. “I expect that NATO leaders will make decisions on this when they meet in Madrid at the NATO summit in June.”

Since the start of the conflict, which erupted on Feb. 24, the United States has increased its troop presence in Europe to more than 100,000. Meanwhile, NATO has since deployed about 40,000 troops to the eastern part of the alliance to countries such as Estonia, Latvia, Lithuania, Poland, Romania, Slovakia, Hungary, and Bulgaria.

NATO is “in the midst of a very fundamental transformation” to deal with “long-term consequences for our security” following the conflict, Stoltenberg added in an interview.

As speculation has ramped up that Russia would work more closely with the Chinese communist regime, Stoltenberg, without elaborating, said NATO is coming up with a concept to account for China’s military aspirations for the first time. Beijing and Moscow are apparently “working more and more closely together,” he said.

Russia has failed to take any major cities since it launched its invasion on Feb. 24 but Ukraine says it has been gathering its forces in the east for a major assault and has urged people to flee.

It comes as President Volodymyr Zelenskyy said on Twitter he had spoken on the phone with German Chancellor Olaf Scholz about additional sanctions as well as more defense and financial support for his country. Zelenskyy also discussed with Ukrainian officials Kyiv’s proposals for a new package of EU sanctions, his office said.

In a video address late on April 9, Zelenskyy renewed his appeal for a total ban on Russian energy products and more weapons for Ukraine.

On April 9, UK Prime Minister Boris Johnson made a surprise trip to Kyiv to meet with Zelenskyy, according to his office, which posted a photo of the two men huddling together. Johnson then announced that Britain would be sending 120 armored vehicles, anti-ship missiles, and other weapons to Ukraine in the near future.

NATO and the United States have already sent numerous weapons—including Javelin missiles, NLAW missiles, Switchblade drones, and other equipment—to Ukraine over the past month and a half.

“Everything Ukraine does with different types of weapons is defensive, it is about defending themselves against the atrocities, against the invasion, against a brutal use of military force against their own country,” Stoltenberg said.