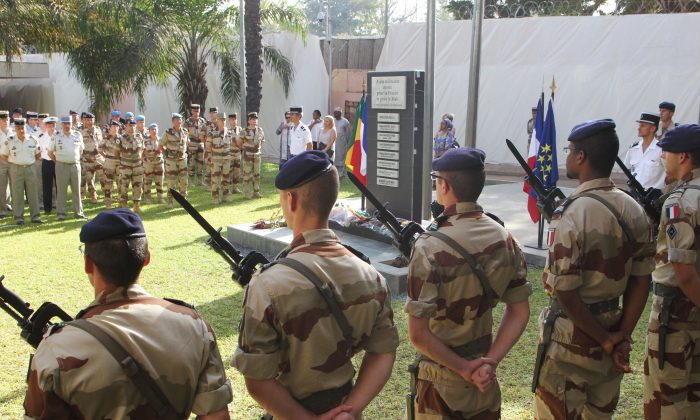 French soldiers stand guard in Bamako, Mali as the French Defense Minister and his Malian counterpart attend an inauguration ceremony for a new monument created in honor of French soldiers killed during the recent military intervention in Mali, Jan. 19, 2014. (Habibou Kouyate/AFP/Getty Images)
Opinion

In the first two decades after the end of the Cold War, NATO looked predominantly east toward Central and Eastern Europe, Ukraine, and Russia. Today it is being drawn increasingly south to the Mediterranean, Middle East, and Gulf for the simple reason that this is where many of the new challenges are located. If NATO wants to avoid strategic irrelevance, it needs to give increasing attention to the threats from the Middle East and North Africa region and develop a “southern strategy.”

A southern strategy should draw on recent experience, such as NATO’s intervention in Libya and the successful operation in Mali, which was carried out by the French with allied assistance. And it should seek to cultivate regional partners able to participate in future NATO operations when necessary.

The southern members of the alliance, particularly Italy and Spain, have long advocated the development of such a strategy. However, their calls initially received little attention because NATO’s top priority at the time was the integration of Central and Eastern Europe into Western security structures. Since the completion of the second round of NATO enlargement, however, the alliance has begun to focus increasing attention on threats from the south.

The Mediterranean Dialogue (MD), initiated in l994, signaled NATO’s recognition of the growing importance of security challenges from the south. The MD includes: Algeria, Morocco, Tunisia, Israel, Jordan, Egypt, and Mauritania. Progress in developing the initiative, however, has been slow. While bilateral cooperation has developed relatively smoothly, multilateral cooperation has proven difficult because of members’ differences with Israel regarding the Palestinian issue and more recently the deterioration of Turkish-Israeli relations.

The Istanbul Cooperation Initiative (ICI), launched at NATO’s summit in Istanbul in June 2004, has been more successful. Initiated by President George W. Bush, the ICI focuses on practical cooperation with the states of the Gulf Cooperation Council (GCC) in areas such as defense transformation, defense budgeting, and defense planning. Other areas include enhancing interoperability, weapons of mass destruction counterproliferation, cooperation in enhancing border security, and civil emergency planning.

Whereas cooperation in the MD has focused primarily on seminars and dialogue, cooperation in the ICI has involved participation in actual NATO operations. Qatar and the United Arab Emirates (UAE) participated in the NATO air campaign against Libya and played a key role in training the rebel forces in Libya while the UAE and Bahrain participated in the International Security Assistance Force in Afghanistan.

A southern strategy will have to take into consideration the lessons learned from NATO’s recent involvement in crisis management operations in the south, especially the Libyan air campaign.

First, the Libyan intervention underscored that NATO members cannot assume that the United States will take the lead in every crisis. President Obama made clear that, while the United States was prepared to take the lead in the initial phase of the intervention when unique American military assets were needed, Washington expected its European allies to take primary responsibility for the mission in its later phases.

Third, the Libyan campaign exposed a number of operational and planning weaknesses. Despite its overwhelming technological and numerical superiority against a fifth-rate military opponent, the coalition faced shortfalls in ammunition and weaponry in a number of areas. Many missions could not be carried out and sustained without significant U.S. military assistance.

In the future, the European allies need to pay greater attention to capabilities such as precision-guided munitions, surveillance, and refueling aircraft as well as unmanned aerial vehicles. However, given the planned reductions and decline in defense spending by most alliance members, it may be very difficult to get key allies to make these needed investments.

Fourth, the deployment on the ground of special operations forces by Britain, France, and other nations (especially Qatar and the UAE) was critical to the success of the air campaign. These forces helped to arm and train the rebel forces and also coordinated close air support as rebel units advanced into Tripoli. The UAE and Qatar participated directly in the air strikes on Gadhafi’s forces. This underscores the importance of deepening cooperation with the GCC countries, especially Qatar and the UAE.

The Mali operation also provides some useful lessons. There is a critical difference, however, between the operation in Libya and the Mali intervention. Libya was a NATO military operation. Mali was a unilateral French operation with allied support. The United States provided military support in three areas—air refueling; intelligence, surveillance, and reconnaissance; and airlift—but France assumed operational responsibility for the mission.

The Mali intervention demonstrated the value of pre-positioning light equipment and associated high-performance mobile forces in areas near the conflict zone. France was able to respond quickly to Islamist and Tuareg insurgents because light armored motorized equipment and motorized military units were pre-positioned in the region. This too is something that NATO needs to carefully consider as it seeks to develop a more coherent southern strategy.

Developing a southern strategy will also require changes in NATO’s mindset and approach to crisis management. In the future, most crisis management operations involving NATO are likely to be undertaken by ad hoc coalitions of the willing rather than by NATO as a whole. These coalitions will include some key members of NATO as well as countries that are not members of the alliance.

This underscores the importance of having capable regional partners who can operate effectively with NATO forces and focus on programs like the ICI, which are designed to enhance interoperability between NATO and regional partners.

The first is missile defense. The prospect that Iran may acquire a nuclear arsenal in the not-too-distant future is likely to intensify the interest of the GCC countries in missile defense and other measures designed to reduce GCC states’ vulnerability to nuclear blackmail.

Energy security is another area where cooperation could be usefully expanded. The European members of NATO are highly dependent on oil and gas from the Middle East and Gulf to fuel their economies. They have a strong interest in making sure that supply lines from the Middle East and Gulf remain open. As major energy exporters, the GCC states also have an interest in secure supply lines. Enhancing maritime security could open up another avenue for potential cooperation.

NATO faces significant challenges to the south and the tumult is not likely to subside any time soon. Crafting a southern strategy now can help the alliance serve its own interests by better responding to future crises in the region.

F. Stephen Larrabee holds the distinguished chair in European Security at the RAND Corporation. Peter Wilson is an adjunct staff member at RAND. This commentary is adapted from an article that appeared in The National Interest.