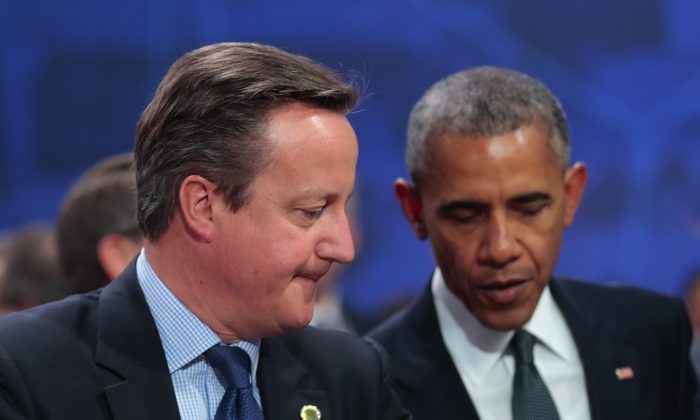 British Prime Minister David Cameron grimaces sitting next to US President Barack Obama before the first working session of the North Atlantic Council at the NATO summit in Warsaw, Poland, Friday, July 8, 2016. Starting Friday, US President Barack Obama and leaders of the 27 other NATO countries will take decisions in Warsaw on how to deal with a resurgent Russia, violent extremist organizations like Islamic State, attacks in cyberspace and other menaces to allies' security during a summit described by many observers as NATO's most crucial meeting since the 1989 fall of the Berlin Wall.(AP Photo/Markus Schreiber)
International

NATO Leaders Meet to Deal With Threats From Russia, South

WARSAW, Poland—Leaders of the NATO military alliance on Friday began a landmark summit that will order ambitious actions against a daunting array of dangers to the security of their nations and citizenry, including a rearmed and increasingly unfriendly Russia to Europe’s east and violent Islamic extremism to the south.

“As the challenges we face change and evolve, so does NATO,” alliance Secretary-General Jens Stoltenberg said as the summit opened. He said the decisions to be made by U.S. President Barack Obama and the 27 other heads of state and government will “shape NATO for years.”

The trans-Atlantic political and military alliance, founded in 1949, must adapt “so our people are safe, our countries are secure and our values are preserved,” said Stoltenberg.

Polish President Andrzej Duda, the summit’s official host, warned that Western democratic values are being undermined by a “notorious lack of respect for international law” as well as terrorism and new high-tech techniques of warfare, and said NATO needs a coherent strategy to combat those problems.

After arriving in Warsaw, Obama announced the U.S. will send an additional 1,000 U.S. troops to Poland as part of a NATO effort to reinforce its presence on the alliance’s frontiers near Russia.

In an op-ed published in the Financial Times, Obama called on NATO to stand firm against Russia, terrorism and other challenges, and to “summon the political will, and make concrete commitments” to strengthen European cooperation after the British vote in June to leave the European Union.

“For our nations to be safe, it’s not enough to keep our defenses strong, we must help to make our partners stronger,” he told a pre-summit of defense and security experts.

“Training local forces is often our best weapon against violent extremism,” Stoltenberg said. Among the items on the summit agenda is increased assistance for Iraq’s military, extension of the West’s financial commitment to the Afghan military and police, aid for Tunisia, and getting NATO more involved in the campaign against ISIS by authorizing use of AWACS surveillance planes to assist the U.S.-led coalition fighting the group.

Polish President Condemns Racism, Anti-Semitism Ahead of Massacre of Jews

In Warsaw, NATO heads of state and government will also formally order deployment of multinational units on the alliance’s eastern borders. The action, telegraphed in advance like most items on the summit program following months of deliberations by NATO member governments, is vigorously opposed by the Kremlin. But German Defense Minister Ursula von der Leyen on Friday called it an appropriate measure to counter what she called a “completely unpredictable and aggressive Russia.”

Along with the U.S. commitment announced by Obama, British Prime Minister David Cameron was expected to tell the summit Britain will dispatch a 500-strong battalion to Estonia and an additional company of 150 troops to Poland. Canada and Germany have committed to furnishing core units for Latvia and Lithuania.

Von der Leyen said Poland and the Baltic states want greater protection because Russia’s 2014 annexation of Crimea from Ukraine shows Moscow “doesn’t respect borders.” The minister told German broadcaster ARD that NATO must maintain a dialogue with Russia, but from a “position of strength.”

“It’s important that NATO deploys with such strength that it’s clear nobody can see an advantage in attacking this military alliance,” she said.

As Obama and the other alliance heads of state and government were gathering in the Polish capital, a spokesman for Russian President Vladimir Putin said Moscow is willing to cooperate with NATO, even though he said it acts toward Russia like an enemy.

Russia “has always been open for dialogue” with NATO, especially to fight what it sees as a “genuine threat” — terrorism, Dmitry Peskov said.

“Russia is not looking (for an enemy) but it actually sees it happening,” Peskov told reporters in Moscow. “When NATO soldiers march along our border and NATO jets fly by, it’s not us who are moving closer to the NATO borders.”

Warsaw may become the most highly secured city in the world during the summit, which takes place after a string of recent extremist attacks across the globe.

Helicopters hovered Friday above the National Stadium, the meeting’s venue, while 6,000 police officers, backed up by soldiers, gendarmes, firefighters and other security officials, were out on Warsaw’s streets.

Security efforts are most heavily concentrated at the stadium, which has been encircled by a metal barrier, and high around hotels hosting the many VIPs. Many streets in the city of 1.7 million have been blocked and some mass transit routes altered, inconveniencing many residents.

The airspace over Warsaw is also being monitored closely, with a ban on flights in a 100-kilometer (60-mile) radius from the stadium. Violators run the risk of being shot down.