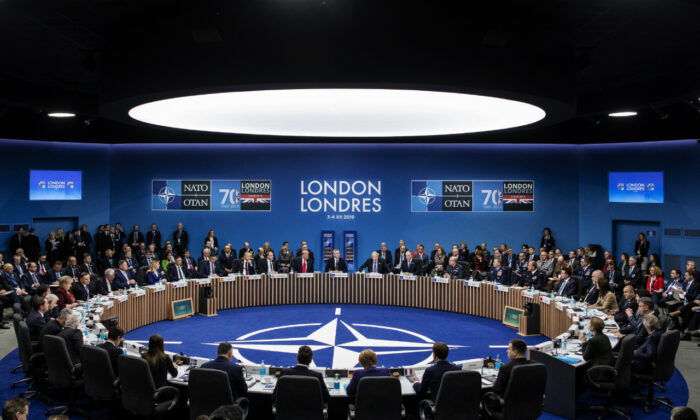 NATO leaders attend the plenary session of the NATO summit at the Grove Hotel in Watford, England on Dec. 4, 2019 . (Dan Kitwood/Getty Images)
International

NATO Leaders Insist on Unity Despite Differences in Views

Leaders of all NATO member states held a plenary meeting on Dec. 4 in London, in the place where NATO was founded 70 years ago.

According to doorstep remarks by NATO Secretary-General Jens Stoltenberg, there were plans to discuss at the plenary session “the fight against terrorism, arms control, and NATO’s relationship with Russia.” For the first time in NATO’s history, according to Stoltenberg, the NATO leaders planned to discuss the rise of China.

Among other issues to be addressed were the readiness of forces, space as an operational domain, and resilience of critical infrastructure including 5G.

The “London Declaration” adopted by NATO leaders at the plenary meeting affirms allies’ commitment to upholding Article 5 of the Washington Treaty (the legal basis of NATO) whereby an attack against one ally shall be considered by all members as an attack on all allies.

The Declaration also points out that NATO will continue to be a nuclear alliance,“ to deter and defend, “as long as nuclear weapons exist.”

It emphasizes the need to “remain open for dialogue, and to a constructive relationship with Russia when Russia’s actions make that possible,” and recognize the need to address opportunities and challenges that are the result of “China’s growing influence and international policies.”

President Donald Trump also held a bilateral meeting with German Chancellor Angela Merkel. When asked during the joint press conference with Merkel whether the U.S. will sanction Nord Stream II,  a gas pipeline under the Baltic Sea running directly from Russian state-owned Gazprom to Germany, Trump said that it has not been determined yet and Germany will have to work it out for themselves. He also said they will talk about it.

The U.S. Congress is concerned that “the pipeline would deepen Europe’s dependence on Russian gas and would allow Gazprom to reduce the gas it ships via Ukraine,” stated Brookings.

Trump also said that he spoke to leaders of a number of countries to persuade them against using China to build their 5G network due to security risks and those who he spoke to agreed not to proceed with it.

President Donald Trump said during the press conference with Prime Minister of Italy, Giuseppe Conte, that defense spending excluding the U.S. increased to $130 billion a year. While the additional funds are used to buy new equipment Trump hopes that “we never have to use it.” “The stronger we get, the less likely … we [will]  have to use it,” he said.

To thank the countries that spend 2 percent of their GDP on defense, President Trump invited their leaders to a working lunch that was held after the NATO plenary meetings. Leaders from eight countries, which he called “2 percenters” joined the lunch: Estonia, Greece, Latvia, Poland, Romania, Lithuania, Bulgaria, and the United Kingdom.

During lunch, Trump said that the United States spends 2.5 trillion dollars on the military.

Stoltenberg who also joined in the lunch said that a few years ago only 3 countries were contributing 2 percent and Trump’s leadership on defense spending encouraged other members to spend more.

Stoltenberg announced before the plenary session of NATO today that the leaders would consider an upgrade to the defense plans for the Baltic states and Poland. For the first time in history NATO has combat troops deployed to the Baltic region led by Germany and Lithuania, he added.

Poland’s President Andrzej Duda said in his remarks during the working lunch, “we are very glad that we are in this group of countries who feel responsibility for—not only for our own security, not only the security of our border but also security of the whole Alliance.”

This approach, called ‘NATO 360 degrees’ is “one of the crucial elements of our Alliance and unity,” said Duda.  The 360 degrees principle means that “the Alliance had to exercise all-round watchfulness to ensure the security of its members,” according to the Polish President’s website.

According to this website, Stoltenberg said that an agreement “on upgrading collective defense plans for the Baltic countries and Poland,” was reached despite Turkish President Recep Tayyip Erdogan’s saying earlier that he would block the initiative if NATO will not support Turkey against “Kurdish YPG militia groups in Syria.”

Duda was involved in the negotiations of these plans and had a conversation with Erdogan to explain to him the importance of the defense upgrade for the Baltic states and Poland, says the website.

The NATO leaders concluded in the London Declaration “We act today to ensure that NATO guarantees those freedoms, values, and security for generations to come.”